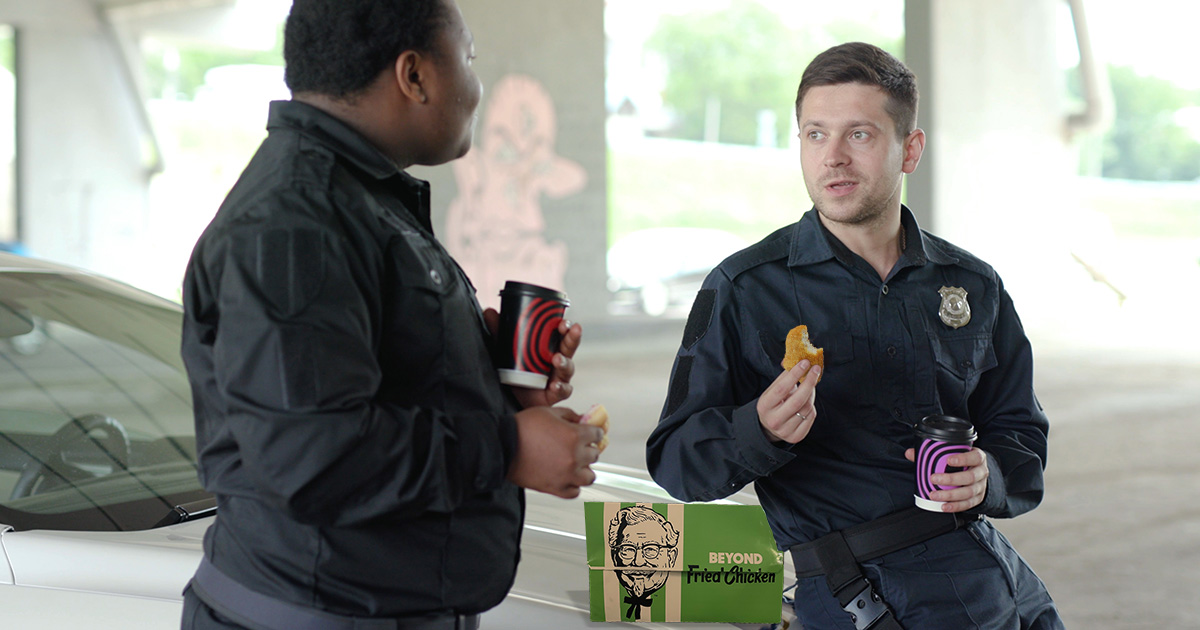 DENVER — Local police officer, and unknowing swallower of other people’s spit, Dale Martin admitted he wasn’t able to tell the difference between his normal saliva-drenched order of KFC nuggets and their new plant-based Beyond nuggets, snickering sources confirmed.

“I was skeptical at first, but these new plant nuggets taste exactly like the chicken I’ve been served here for years,” said Martin between mammoth bites of the carefully prepared food. “They have the same crispy skin with the slimy bits that taste like tobacco and energy drinks. There was a time I thought I was done eating fast food, every time I ate out I would find about a dozen pieces of hair in my burger. I haven’t had that issue with KFC, they run a tight ship. That’s why I plan on bringing my kids here if I’m ever allowed unsupervised visits with them again.”

“Cop after cop comes in here asking for the new special,” the seasoned Chef de Cuisine shared between a phlegmy smoker’s cough and a long pull from his Red Bull. “We always give them something special, but I wouldn’t call it new. As a matter of fact, I’ve been sourcing the same secret ingredients from my chronic sinus infections and stubborn bronchitis for years. We’ve got this one new cook who dips Coppenhagen, and he can regularly hack up plump throat oysters with the consistency of uncooked egg whites. Talented guy, but I’m still teaching him how to spot cops out of uniform. Avenged Sevenfold t-shirts and visible signs of steroid use are always dead giveaways.”

“People all over the country are eating less meat to reduce their carbon footprint and that actually includes a lot of police officers,” said Fassbinder. “We worked hard to find the correct cooking temperature so the nuggets absorb the snot and sputum properly. We gave test samples to thousands of jackbooted piggies to make sure none of them could taste the difference. Once we got the temp right, none of them believed it was synthetic meat. This will allow hard-working fast-food employees to continue spitting with impunity.”

At press time, Officer Martin was at the bar drinking a Coors that appeared much more yellow than usual.