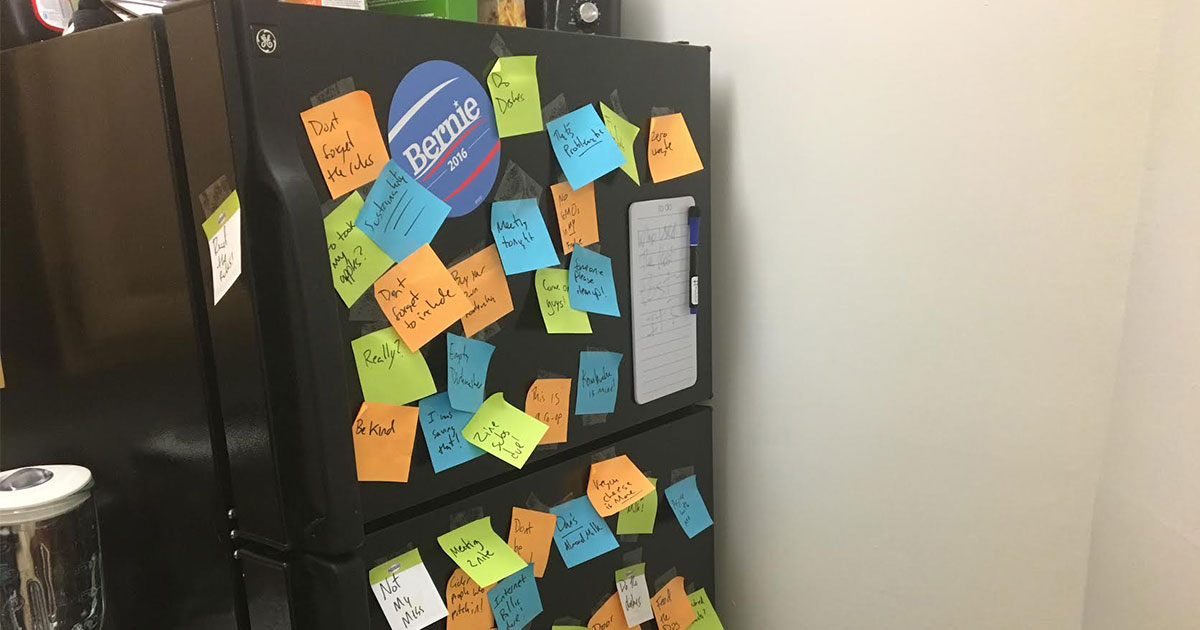 “Some of it is just confusing,” said leasee Jackie Peterson, pointing to a post-it stuck to the floor. “Like, take this note for example. It says, ‘THIS IS CAT LITTER. IT GOES IN THE LITTER BOX.’ In the time it took to outline those words with a glitter pen, this person could have swept it up… and now there’s glitter ink everywhere. Maybe you should ask Marisol — this totally seems like something she would do.”

The co-op roommates all admit to a history of using post-its for classic tasks, such as personal reminders and notes, but testimonial reports suggest the small pieces of sticky-backed paper are increasingly being used as a weapon.

“To be honest, we probably wouldn’t have this problem if some people around here respected each other’s almond milk,” mused resident Marisol Carillo, whose bedroom includes additional working outlets. “But no, I am not behind this. Anyone with half a brain knows I don’t dot my ‘i’s with circles!” she shouted, holding up an old show flyer she had designed as evidence.

Bewildered new resident Brian Kipper admitted he’s struggled to parse the cryptic messages left throughout the communal home. “I can’t tell if this person wants the toilet seat up or down because all the note said was, ‘THIS IS OPPRESSIVE,’” he said. “It sort of looks like it’s written in blood… it’s unnecessarily menacing.”

As the holidays approach, many residents of the 15-member co-op report feeling increasingly disconnected from their roommates.

“I think whoever did this is also outlining my name in Sharpie on the chore wheel,” said Davis Raoult, who makes a point of cleaning his own dishes after use. “It’s not cool. I’ll get to the chores when I get to them. I’ve been very busy setting up a proper funerals for compost worms, but, clearly, some people here aren’t as compassionate as me. They don’t realize how time consuming it can be.”

As of press time, residents report the mysterious installation of a giant whiteboard on the entire north wall of the kitchen adorned with a single note, reading, “Be upfront if you have a problem!”