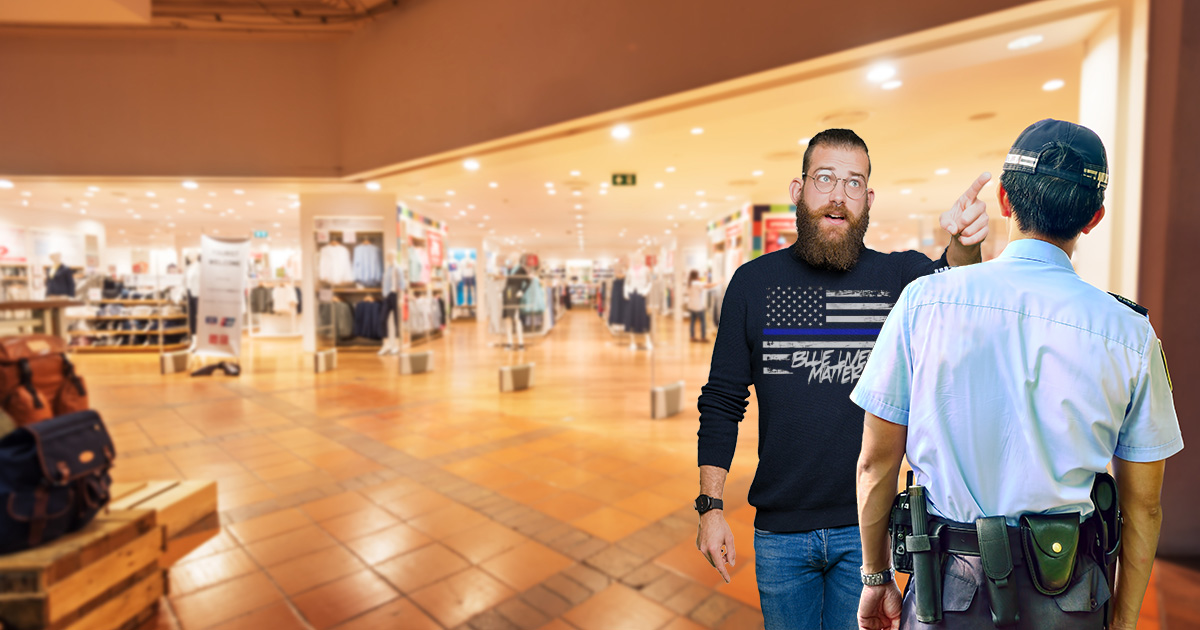 FREEHOLD, N.J. — Local mall security guard Corey Knightly was in shock after a known ‘Blue Lives Matter’ proponent tore into him for 20 minutes over matters regarding running around corners too fast, onlookers reported.

“I saw a bunch of unattended kids messing around in the food court fountain, so I had to set them straight. Before I could even take their names down this guy in a ‘Back the Blue’ shirt comes swooping in and starts shrieking at me about harassing his kids,” said part-time Allied Universal employee, Knightly. “For someone who allegedly respects authority he had no issue calling me a ‘braindead asshole’ and a high school dropout for almost half an hour. I know my ability to enforce anything is tenuous at best, but his kids were literally stealing loose change that we donate to charity. I’d kick my own grandparents out for shit like that.”

Despite the confrontation occurring hours before, father of two Rob Johnston was still incensed that his family was on the verge of being ejected from the mall.

“I come to this mall every week, sometimes twice, and this is how they treat me? Without patriotic Americans like me stimulating the economy, that little mall Nazi wouldn’t even have a job,” said Johnston. “If my kids want to express themselves, they can do so wherever they please, and don’t need some wannabe Serpico telling them otherwise. He’ll kick my kids out of the food court but won’t do anything about a black guy hanging out in front of Yankee Candle for ten minutes. Their priorities are completely backwards.”

Mall staff who intervened were not surprised that it was Johnston arguing with security, as this has been an ongoing trend.

“Oh, Blue Lives Brad? Yeah, he’s a piece of work. We have this theory that his chinstrap beard makes him more aerodynamic when cutting in front of people at Starbucks. But what sets him apart from the other jerks is his ability to simultaneously claim he respects the ‘law’ while breaking every rule we have here,“ said mall manager Bill Irwin. “One time he doxxed a guard who called him out for abusing the free samples at Leann Chin. We’d call the actual cops on him but every time we try he whips out a PBA card and tells me he’s untouchable.”

As of press time, Johnston was seen being escorted out of the mall by several guards after claiming it was his First Amendment right to scream at the Orange Julius employees.