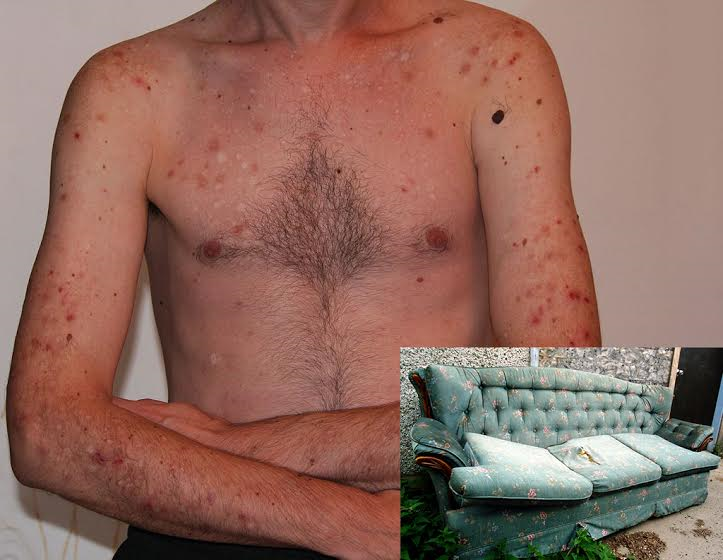 EUGENE, OR – As touring punk band Blüd Borne settled in at “The Punkin’ House” after a show Wednesday night, bassist Mark “Sparf” Ludlow called dibs on a seemingly innocuous couch — a decision he immediately regretted.

Shoving the band’s vocalist, Muskrat, out of the way, he dove for the piece of furniture and landed in a puddle of warm liquid of undetermined origin.

Sparf’s landing on the couch unleashed a plume of foul air that had been accumulating within its cushions for many years. Band members described it as a mix of black mold, fecal matter, and nutritional yeast as they fled the living room for safer ground.

Muskrat slept uninterrupted under the table, an area that was surprisingly clean due to the house’s several dogs immediately vacuuming up all food droppings.

“Sparf always gets screwed on sleeping arrangements,” said Blüd Borne drummer Dulch. “Last night he had to sleep in an outdoor shed and froze his ass off. The night before he was in a bathtub that probably hadn’t been cleaned for five years. So he really thought he was winning this time.

“I hope he’s had his tetanus booster … and isn’t allergic to mushrooms,” Dulch added, then settled into a deep, nourishing sleep on a pile of unsold t-shirts from the house members’ former bands.

Sparf reportedly tried to find a comfortable position on the couch to avoid being impaled by protruding springs and tiny pieces of light bulb glass jammed into crevices. To add insult to injury, the dampness of the couch seeped through Sparf’s only good pair of jeans.

Anonymous house members revealed that the couch was found on the street in a rainstorm two years ago, and had never thoroughly dried due to a series of unfortunate “re-wettenings.”

Guitarist Furt watched Sparf struggle, then walked upstairs to a recently unoccupied bedroom that had been meticulously cleaned by the previous tenant.

“If I don’t move, it’s almost like sleeping in a pile of wet hay,” said Sparf, now assuming an awkward fetal position. “Surprisingly, I’ve had worse.”