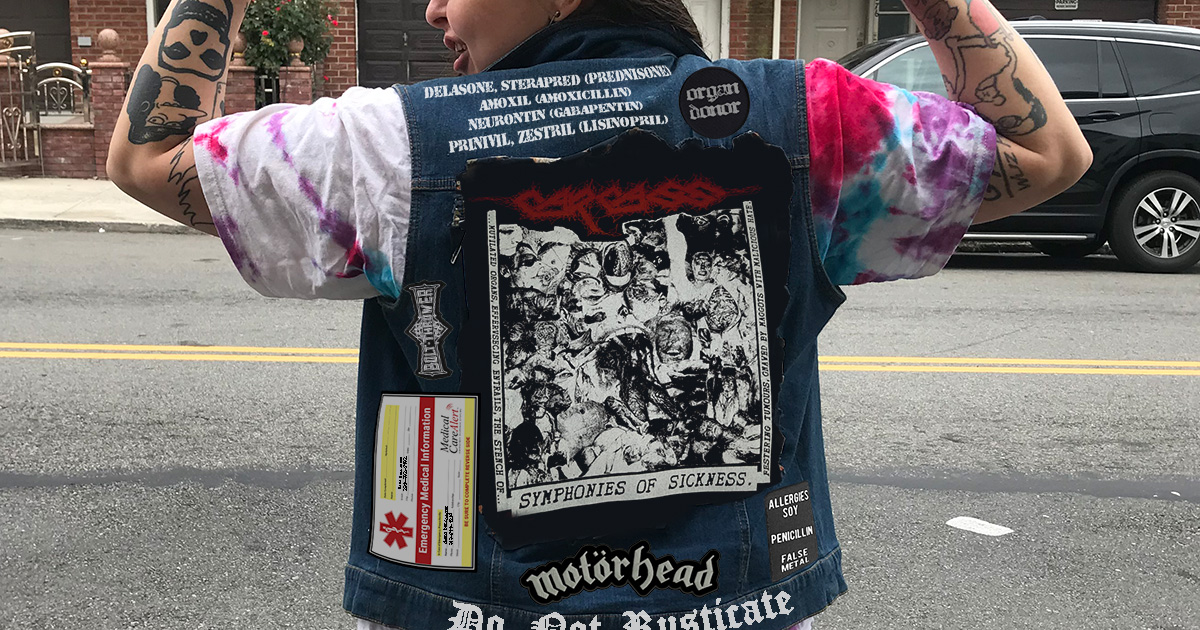 “Anyone will tell you I like my metal brutal, but there’s no shame in being brutally cautious about your health,” explained Dellarose, a longtime staple of New York’s extreme metal scene. “For example, I airbrushed my prescriptions next to my Carcass ‘Reek of Putrefaction’ patch, and added my ex-wife’s work number just in case. It’d be a nightmare to be at a fest and pass out in the middle of the pit because my insulin levels got dangerously low, and nobody was there to give me a shot to boost me back up. I don’t even want to tell you what would happen if I got stung by a hornet.”

Dellarose’s bandmates commended him for revising his vest to include information about his blood thinners.

“We love Greg, and want him to shred with us along this mortal coil as long as possible,” confided Vinny “Pinworm” Piegaro, vocalist for Dellarose’s band Putrid Avulsion. “And if that means stocking the practice space with low-sodium snacks and whole grains, then so be it. Personally, I think it’s very metal that he lets everyone know he has sports-induced asthma. He does lean on the whole ‘allergic to latex’ thing a little bit much whenever he meets a new woman, though.”

In a subculture obsessed with death, the attention to healthy living is a welcomed trend among local health professionals.

“This is a huge help,” said EMT Camile Morales. “Sure, ‘Organ Donor’ and ‘Do Not Rusticate’ sound like metal bands, but it’s valuable information for us if things go south. And I guess it doesn’t hurt to know his favorite Bolt Thrower album. While it might seem hardcore to stab oneself with an epipen, I’m glad he updated his vest to include his allergies to soy, penicillin, and false metal.”

Dellarose’s upcoming weekend plans include starting an enema juice cleanse, some Krallice, and cutting the sleeves off his pajamas.