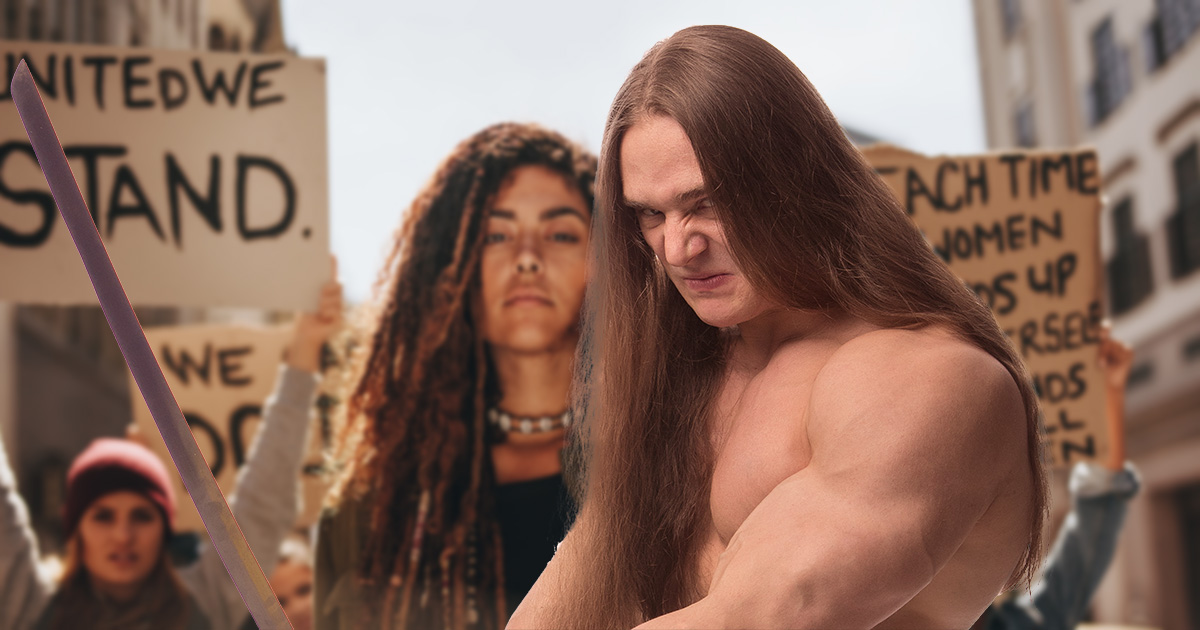 MILWAUKEE — Activist metalhead Ricky Miranda vowed today to fight tirelessly for racial justice, as well as the right to carry gigantic broadswords onto commercial airline flights, according to supportive but confused sources.

“I’m sick of seeing people of color oppressed, discriminated against, and murdered in our streets,” Miranda shouted while protesting outside of the mayor’s office. “America needs to confront this head-on, and it’s time we organize and make our voices heard in the metal community. Everybody, after me: When I say, ‘Black lives!’ you say, ‘Matter!’ When I say, ‘Swords!’ you say, ‘Should be allowed in a carry-on bag or considered a personal item if they fit under the seat in front of you!’”

According to sources close to Miranda, however, he has only recently shown interest in current events and social justice.

“He never used to be involved in politics or anything,” noted Miranda’s longtime girlfriend Annabelle Porter. “But he’s really changed in the last few years. I think he’s been radicalized by reading ‘Between the World and Me’ by Ta-Nehisi Coates, and getting kicked off a Spirit Airlines flight to Cleveland for bringing on a replica 9th-century Viking sword. Which, might I add, he didn’t even brandish! Fucking Spirit.”

Although not typically associated with progressive activism, the metal community has a history of advocating for obscure and unusual causes.

“I’ve studied heavy metal extensively, and found several instances of metalheads fighting for issues important to them,” noted Dr. Alejandro Reyes, a professor of musicology at Marquette University. “There was the famous Seattle protest in 1985 for the right to ride motorcycles indoors; there were the rallies in Pittsburgh to lower the drinking age to 13 for domestic beer and malt liquor… and, of course, the 1993 march on D.C. to replace ‘The Star-Spangled Banner’ with Pantera’s ‘Primal Concrete Sledge.’”

Miranda’s next attempt is to mobilize his Twitter followers to join him in a pledge to only purchase scythes, custom van accessories, and exotic snakes from black-owned businesses.