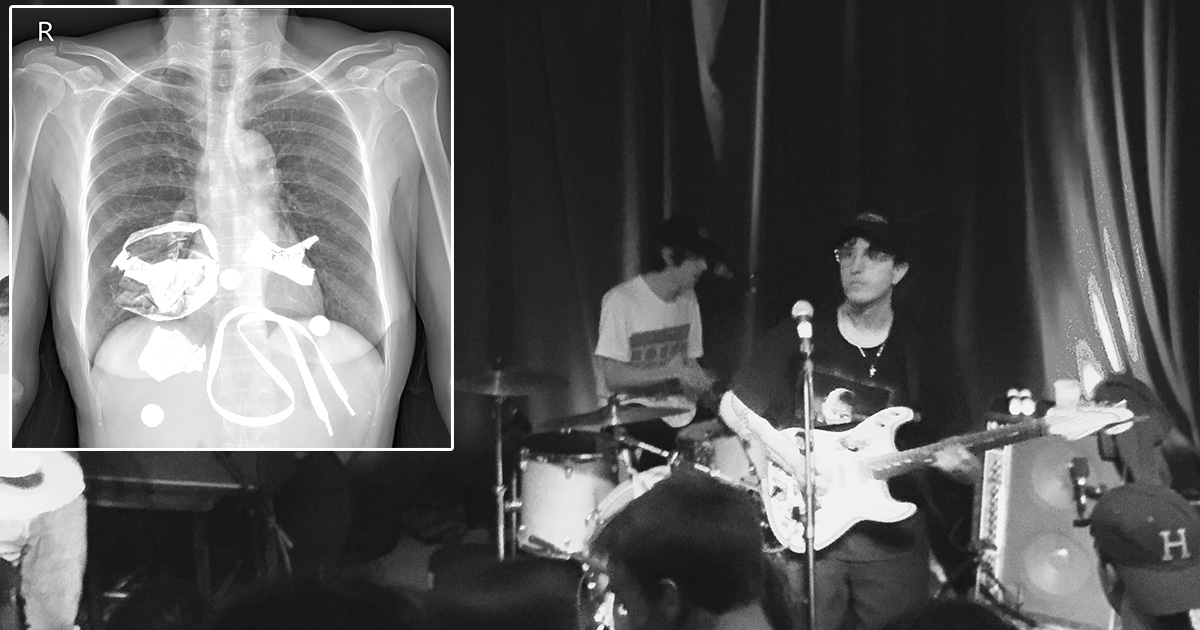 BROOKLYN, N.Y. — Anton Hochheim, the drummer of lo-fi surf rock band Beach Fossils, was found yesterday with four pounds of garbage and other debris in his stomach during a routine medical check, according to a horrified source.

“You sometimes find this in large sea animals… but I was completely unprepared for all that debris on the x-ray,” explained Dr. Rita Palmer. “There were plastic wrappers, bottle caps, a shoelace, and half of a deflated beach ball in there. A normal person would’ve come in before it got that bad, but these touring bands are so used to things like constipation, body pains, dehydration, and delirium that he just didn’t notice the difference.”

Hochheim admitted he was “not stoked” when he learned how much literal garbage was inside his body, but said he’s mostly resigned to the situation.

“It sucks, but that’s the world we live in now,” said Hockheim. “Most bands have to tour and sell merch constantly just to break even — you know, like how sharks have to keep swimming, or they’ll die? They can’t afford to slow down and worry if the stuff they’re eating is food or if it’s a plastic visor they thought was a taco shell. Well, neither can I.”

Local environmental activist Tim Weaver said he expected to see increases of these incidents in musicians, “but not until at least 2050.”

“Frankly, every single one of us should be alarmed that these bands are devouring so much toxic, plastic garbage,” said Weaver. “I’ve heard of at least two similar incidents in the past year, with members of La Luz and Best Coast. Either something major needs to change, or millions more innocent, simple drummers just trying to subsist in their natural habitats are going to keep consuming toy shovels, plastic straws, styrofoam cups, and everything else that’s polluting our oceans. It’s bad for the musicians, it’s bad for the environment, and it really, really grosses out their fans.”

At press time, Hochheim’s surgery to extract the assorted plastic garbage from his stomach was delayed until doctors could remove the ingrown plastic six-pack ring from his arm.