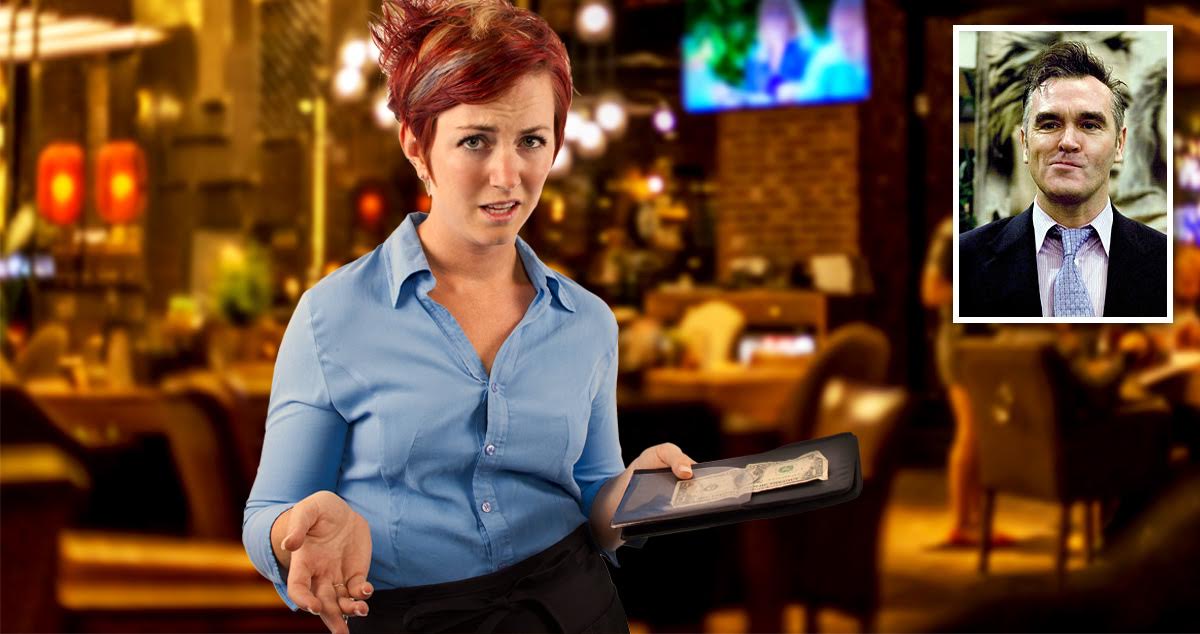 We all know that from time to time celebrities will leave a big, life-changing tip for their waitperson that inevitably finds its way to social media. But this past Sunday at Echo Park’s Jupiter Café, Morrissey, the often-shirtless former lead singer of The Smiths, gave a tip to struggling 23-year-old waitress Allie Paige that will almost certainly ruin her life forever.

According to Allie’s numerous social media posts, the morning rush was finally slowing down when Morrissey entered the café and sat in her section. It had been a fast-paced and upbeat morning at Jupiter, but suddenly it seemed like a dark cloud rolled into the café.

“I asked him how his morning was going and he sighed dramatically and wrapped his arms awkwardly around his shoulders like this,” Allie told me while embracing herself in a weird, depressed hug. “So then I asked if the table was OK and he sighed again saying, ‘Oh, this table is perfectly mediocre, but life is a pigsty.”

Wondering if perhaps he was just a little hangry (like we all get sometimes), Allie offered to take Morrissey’s order, but this too seemed to upset the notoriously picky eater.

“He ordered a vegan blueberry muffin and when I informed him that we were all out and suggested a blueberry scone instead, he did that weird self-hug thing again and clumsily flopped on the table muttering that he ‘doesn’t believe in magic anymore,’” Allie said shaking her head. “It was really weird.”

Related: I Tried the Henry Rollins Fitness Plan for 30 Days and Now I Can’t Stop Yelling

Allie has had some weird advice from customers in the past (she told me about one guy who made his eggs and bacon smile and then said ‘you should do that more’ to her — GROSS!), but this tip will be hard to shake for the struggling waitress who is just trying to get by in the aftermath of a tough breakup.

“I just started thinking about how miserable my life is. I can hardly pay the rent for my shitty apartment, my ex-boyfriend just moved in with his new girlfriend, and I fucking hate working at this place. What if Morrissey is right? What if things don’t get better for me and everything really is utterly dreadful?” Allie said fighting back tears. “Because I’m human and I need to be loved too, you know?”

I think Moz went too far this time. But what do you think? If you agree with the waitress comment your last words below.