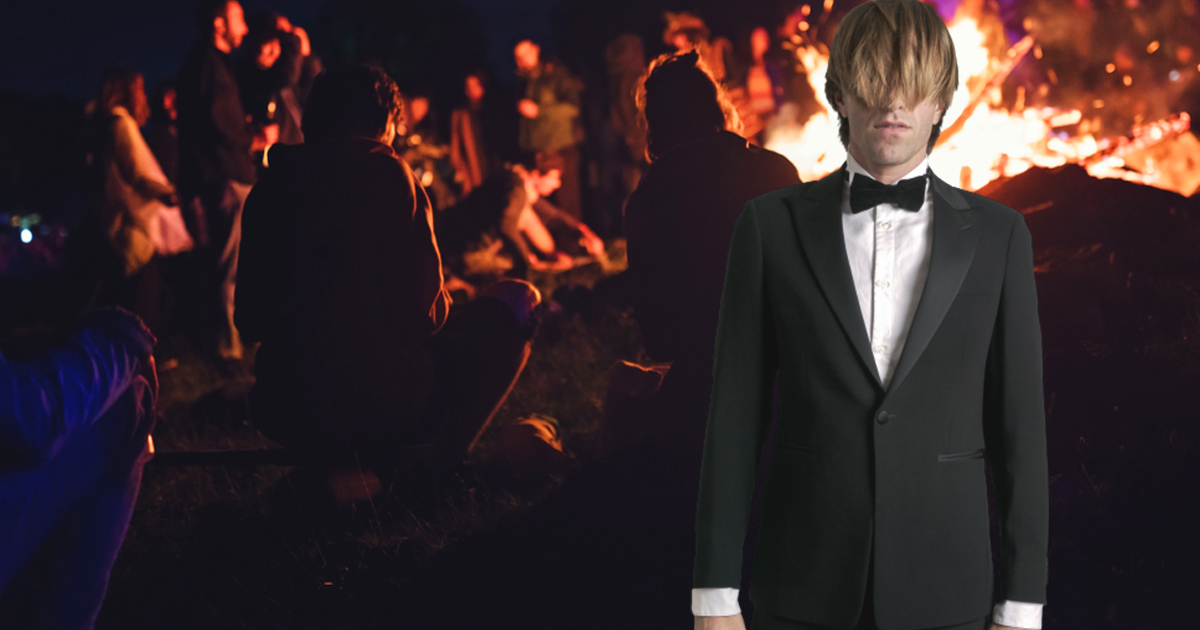 Sometimes in the punk scene, a friend will take the partying too far and all you can do is be supportive when they get clean. Here’s the problem, our buddy is acting super different, but we can’t tell if this is just him reaching his full sober potential or a direct result of doing tons of cocaine. What I’m trying to say is he has begun inexplicably wearing a tuxedo everywhere.

I first noticed it during a bonfire in the woods. I hear a voice say “hey,” so I turn around and freak out because all I see is 6 feet of tuxedo and I thought it was Slenderman. It’s actually my newly sober friend Justin, who after that initial shock, seemed like he was doing well. I was like “hey man, you doin ok?” He then gets this big grin on his face and goes “oh I’m BETTER than ok. I am LIV-ING-THE-DREAM.”

Now nobody who isn’t on a shit ton of cocaine says things like that, but this guy did supposedly just kick a severe addiction so a little bit of mania is probably normal, right? Perhaps there is a point in sobriety where you feel so good you look indistinguishable from someone tweaked out of your goddamn mind.

A few days later Justin invited me to check out one of his new sober activities, helping out at Habitat for Humanity. Justin was incredible! But like, maybe a little too incredible? Everyone kept saying things like “We can’t keep up with this guy” and “Where does he get the energy?!” and I started to wonder where was he getting the energy? I tried bringing it up to him and all he said was “Helping others just gives me this huge rush you know? GOD, do you smell that sawdust? Makes me feel alive! Makes me HORNY!” Keep in mind, during this entire scenario, the dude was still wearing his tuxedo.

It’s been about 3 weeks and you would think the tuxedo would be worse for wear at this point but it isn’t. I don’t know if he owns multiple tuxedos or he’s just really good at home dry cleaning. What I do know is that according to his roommates, on the rare occasion that he sleeps he sleeps in a tuxedo and when he wakes up he goes straight to the gym, in said tuxedo.

The kicker of it all is that his rock bottom was showing up to his sister’s wedding in ripped jeans and a dirty t-shirt. Maybe this is his way of atoning for that?

I’m probably not going to say anything. Even if he is on drugs again, he’s really helping people and looks fabulous doing it. If he isn’t on drugs, well watching him move that fast makes me feel like I am. At the end of the day he seems happy, productive, and I’m thankful he hasn’t become one of those straight edge assholes who judge me while I do whippets in the middle of Barnes and Noble.