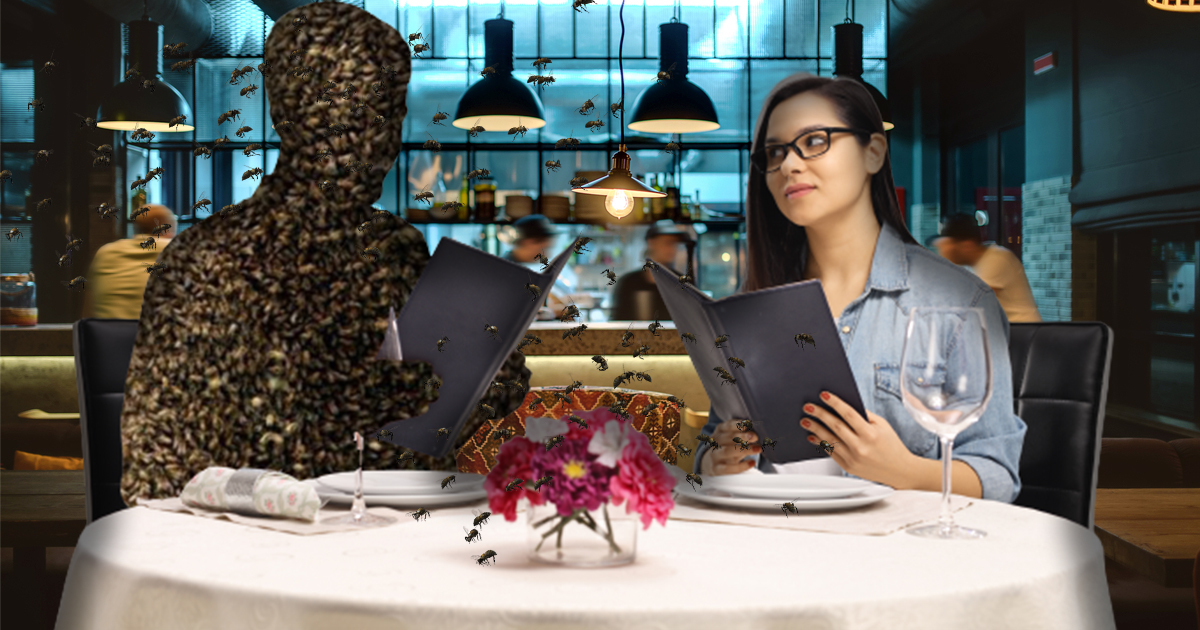 Meeting a new romantic partner is technically easier than ever, but weeding through dating apps is enough to make dying alone feel like a viable option. Then, one day, your hours of swiping pay off: they’re an actor, have impeccable taste in music, and love the outdoors! Sounds too good to be true? Well, maybe it is.

If you agree to meet for dinner and want a real love connection, here’s how you can tell whether they’re “the one” or just the swarm of angry bees that set in motion the tragic ending of the 1991 film “My Girl.”

5. Keeps talking about protecting the Queen
Okay, so maybe “Queen” is a metaphor. They could be talking about their dog, their mother, or they could just be really into the Royal Family. But if they mention anything about said queen eating copious amounts of jelly, or having more than 200 brothers and sisters, maybe don’t order anything with sugar in it.

4. You hear a constant, indistinct buzzing every time they talk
A trendy restaurant may seem like a good choice for your first date, but trendy restaurants are busy and loud. You’ll spend most of the evening scream-talking about general interests, and take it from me, that is a one-way ticket to Dating Bees Town! Instead of pulling this rookie mistake, pick a more intimate setting, and listen closely. Are they talking about their family’s lake house in upstate New York, or is their voice just a droning, ominous buzzing noise, and you’re maybe just hearing that lake house stuff because it’s what you want to hear? Listen between the words.

3. They insist the waitstaff change out the flowers every 20 minutes
A good table centerpiece can make or break a romantic dinner, but if you notice they’re too rigid about the flower arrangement on the table, something may be up. Are they constantly prodding at it and rubbing pollen all over their arms? Are they asking for more floral arrangements than drinks? Do they get aggressive with the waitstaff when they run out of flowers, and then demand a bowl full of orange slices? If you answered yes to any of those three, it might be a good idea to keep your hands under the table, lest you be stung.

2. Keeps name dropping Dan Aykroyd
They know a celebrity, and he’s one of the Ghostbusters? Score! But then every story they tell is like, “One time Dan and I got really high on royal jelly on set,” or, “Dan and I used to prank call Chevy Chase and tell him his career was over.” You know, really specific stories that would have only happened within a one-month window during the beginning of the ’90s when “My Girl” was filmed.

1. Knows way too much about Macaulay Culkin’s medical history
Okay first of all, this an egregious HIPPA violation. More importantly though, why do they know Macaulay’s blood type and how many epi-pens he keeps on hand? This is a dead giveaway that your potential mate is not actually a person, but a swarm of angry bees just waiting for you to pick up an errant mood ring.