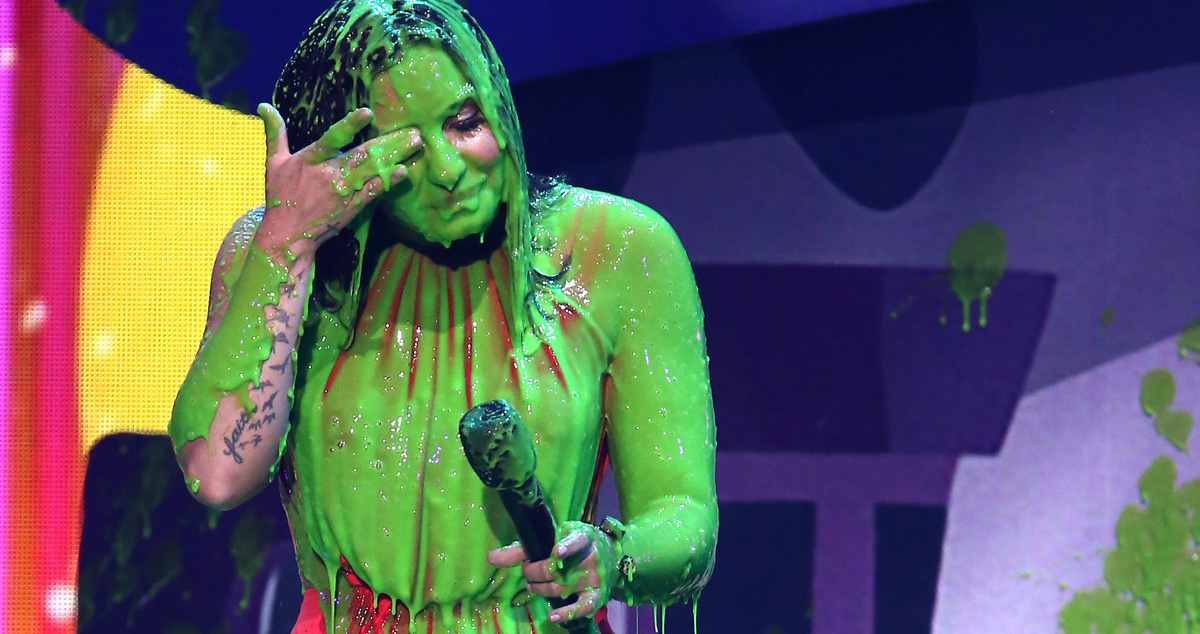 Two things I know for sure — Most sexual fetishes can be traced back to a singular, intense childhood experience, and ’90s Nickelodeon totally ruled! The game shows, the Nicktoons, the Gak! Glorious, all-consuming, viscous, sensuous Gak that smothered every crack and crevice…

Understandably, many of us now adult ’90s kids developed peculiar Nick-themed sexual fetishes. And believe it or not, none of these sexual fetishes are called “The Angry Beavers” or “Weinerville.” Here are some of my darkest, taboo-shattering sexual fetishes and how my favorite childhood TV network inspired them:

The one that started it all. “Gaking” is probably the most mainstream of all my sexual fetishes. Heck, some of you are probably enjoying a solid Gaking session right now. Although I’m sure everyone already knows this, Gaking, of course, is binging on a 64 ounce jug of homemade, green Ecto Cooler and vomiting it over your partner’s head. Usually that partner is wearing a long red Danny Tamberelli wig and will use this glorious ginger mane to fling the Gak onto the “Figure It Out audience” behind them (in my case, the “audience” is my neighbor Ari. He likes to watch). But beyond that, this is pretty much an average Tuesday for me.

This one involves dressing up almost exactly like Doug Funnie’s classic superhero alter ego Quailman. Except instead of a belt on your head it’s around your neck. Instead of a pair of tighty whities you slather your whole bathing suit area in mayonnaise. And instead of putting on a green sweater vest, you’re banging on your lover like a trashcan.

Rumor has it that some freaky deaky ’90s kids do a variation on this fetish called The Smash Adams, but it’s not for the faint of heart.

Related: Anyone Wanna Hang Out and Just Name Stuff From the ’90s With Me?

For this fetish, “the Donkey Lips” (usually the dom in the relationship) has to do laps around the apartment (or house, truck stop, sex dungeon, or wherever you happen to be on your lunch break), while “The Sponge” (almost always the sub) has to eat six whole bananas. At some point, you also fuck each other.

Fun Fact, Salute Your Shorts fans: In upstate New York this fetish is known as “The Ug Lee.”

I’m going to level with you. This fetish is less about sexual gratification and more about my love of rock puns. But if anyone wants to come over my place and orgasm while I impersonate Olmec from Legends of the Hidden Temple, then let’s rock!

Go ahead and fire up the fog machine, slather your body in sparkly silver paint, and fill your holes with confetti as your partner climbs to the top!

What’s great about this fetish is that former Global Guts Host Mike O’Malley is so desperate for cash that for a couple hundred bucks he’ll come over your place and repeatedly scream “DO YOU HAVE IT??” while you have sex.

It really is true that the ’90s had the best kids shows. Though I’m stoked to see what crazy fetishes come in the wake of PAW Patrol.