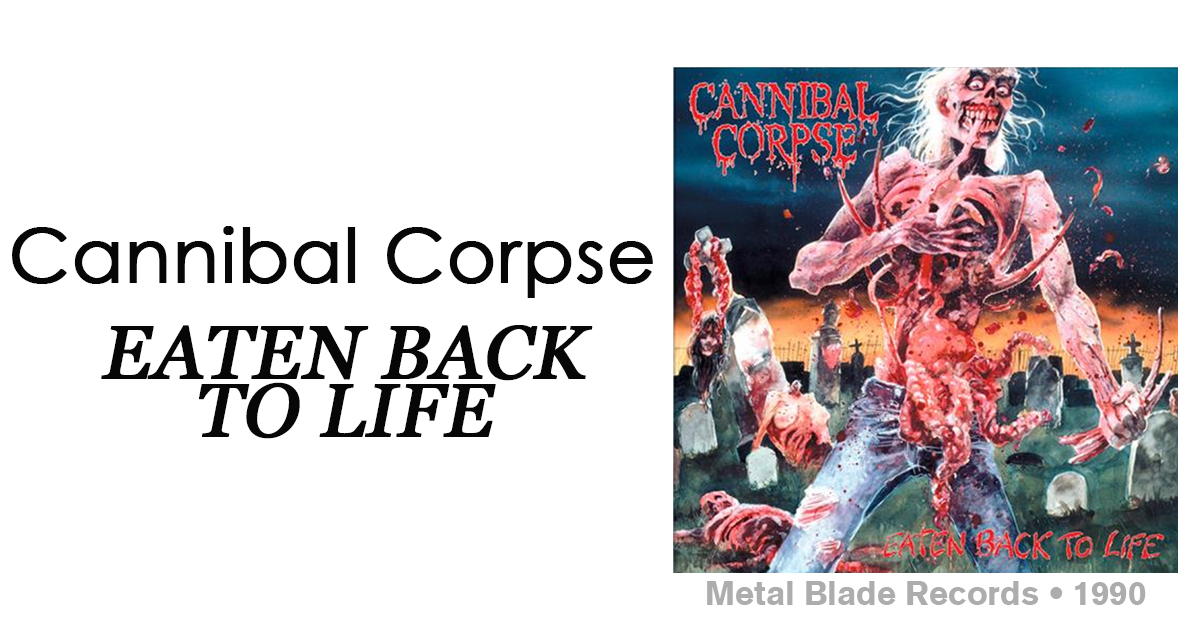 Each Sunday, The Hard Times travels back and reviews a notable album from the past. This week we cover “Eaten Back to Life,” the 1990 debut from death metal pioneers Cannibal Corpse.

Everyone remembers exactly where they were the moment they experienced a Cannibal Corpse album cover for the first time. This is commonly referred to as death metal 9/11. My initiation was no different.

There I was flipping through the Candlebox section at Tower Records as I did every week hoping to find a Japanese import of their self-titled album (don’t even act like “Far Behind” doesn’t still rip) when all of the sudden the Candlebox vinyl I was carefully perusing unexpectedly switched over to the Cannibal Corpse inventory without warning. The divider that typically separates each band’s records was curiously missing. Alphabetically speaking, very serendipitous.

That’s when I laid my eyes on the Corpse’s very first release titled “Eaten Back to Life.” It immediately struck me that this was not your everyday cover depicting the undead feasting on its own rotting intestines with blood and guts spilling over its relatively intact jeans. No. It was so much more.

I mean, for the first time in my life I had forgotten why I had even stepped foot into Tower Records in the first place before eventually remembering I was there to complete my collection of rare Candlebox records. But I couldn’t look away from that Cannibal Corpse cover. Candlebox just never put in this level of effort on their album art. The best they gave us was a somewhat blurry photo of them surrounded by an assortment of chrysanthemums.

I just had to know if the tracklist lived up to the artwork, so I flipped “Eaten Back to Life” to the back and let me tell you I was not disappointed. From “Edible Autopsy” to “Rotting Head” to the other nine brutally named tunes, you’ve got to admit that Candlebox did not have a brand this succinct.

I bought a copy of “Eaten Back to Life” without ever hearing it before. The sound of the record immediately seemed off. I thought maybe the rpm on my record player was set to the wrong speed because they were playing too fast and the vocals were muffled. Turns out that’s just Cannibal Corpse being Cannibal Corpse.

But anyway, what I heard was some pretty evil and downright satanic material, so I went to my backyard, whipped out the lighter fluid, and set fire to my Candlebox collection. I didn’t need them anymore. I had found my new Candlebox.