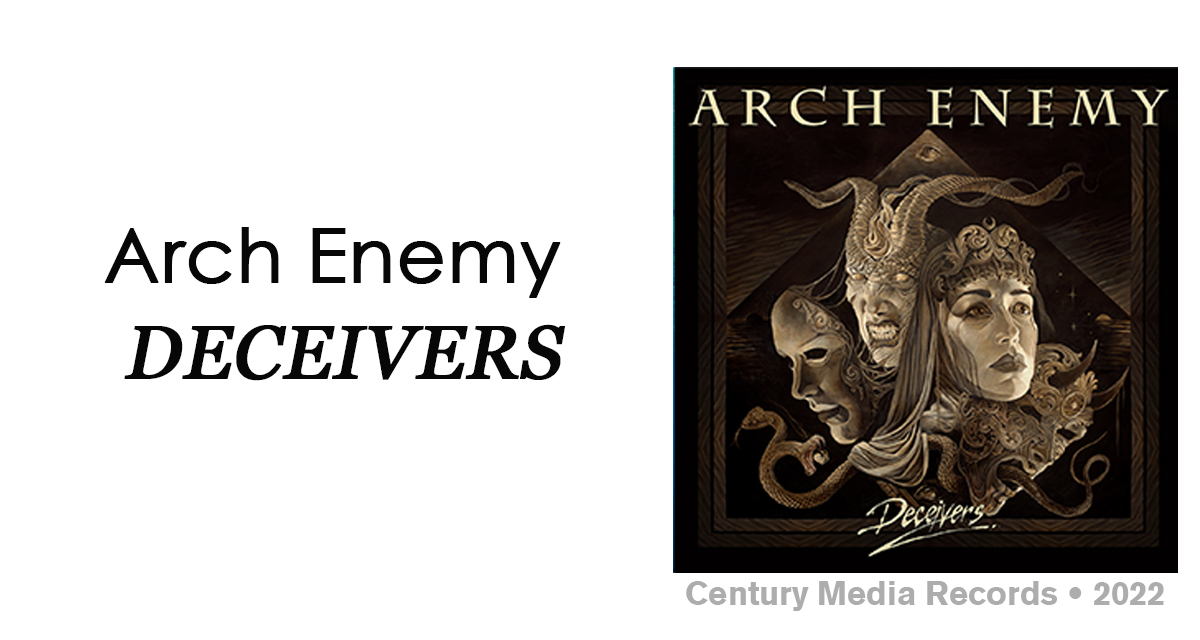 With all the turmoil in the world, we can be happy that Swedish legends Arch Enemy are back with their long-awaited 11th album “Deceivers” which once again raises the bar for anyone in the melodic death metal genre.

Everyone has their own personal arch-enemy in life. For some, it may be a childhood bully or dickhead boss, or maybe something more abstract like agoraphobia. Mine was fellow 11th grader Zach Dobrowsky.

Zach and I were the only two kids in our class who took playing guitar seriously. But it always felt like he was a step ahead. I had a Guitar World magazine subscription, he had Guitar Player. I learned a song, he learned it in half the time. I uploaded an mp3 to some shady file hosting site, he had a proper artist page on PureVolume.

Things came to a climax at the Winter Talent Show. My crush Jessica’s favorite song at the time was Avenged Sevenfold’s “Bat Country.” So I decided to play that on guitar for the show. In the lead-up, I offhandedly mentioned this to Zach, who seems surprised that I would pick such a tough song but admits that he can’t sweep-pick either. He then passive-aggressively wished me luck.

Cut to the talent show. Dobrowsky is on the list before me. When it’s his turn, he walks out on stage with his Ibanez guitar. The lights darken. A creepy voice bellows “He who makes a beast out of himself gets rid of the pain of being a man.” HE STOLE MY SONG. Not only does he shred the “Bat Country” solo, he NAILS the sweep-picking part. I was just going to play something easier over it.)

Jessica asks Zach to the prom right after he walks offstage. I drop out of the talent show without performing. At prom, she gives him an over-the-pants hand job. That should have been my OTPHJ. MINE.

Anyways, Arch Enemy’s new album “Deceivers” is a constant reminder of my failure. Seven-string guitar virtuoso Jeff Loomis makes a point of sweep-picking and rubbing it in my face on almost every track. Frontwoman Alissa White-Gluz gets in on the fun too and seems to love reminding me that I can’t sing nor scream in any way that another human being would find enjoyable. But I can probably play bass as well as their bassist. Whatever.

If you’re curious about where we stand today, Zach and Jessica have a beautiful family with 4 little angel children, and I’m getting sued because my dog bit an old lady in a wheelchair last week.

SCORE: 5 Broken strings and 1 heart that has never healed