Opinion: I Now Side With Every Dad From All Those 80s Metal Videos 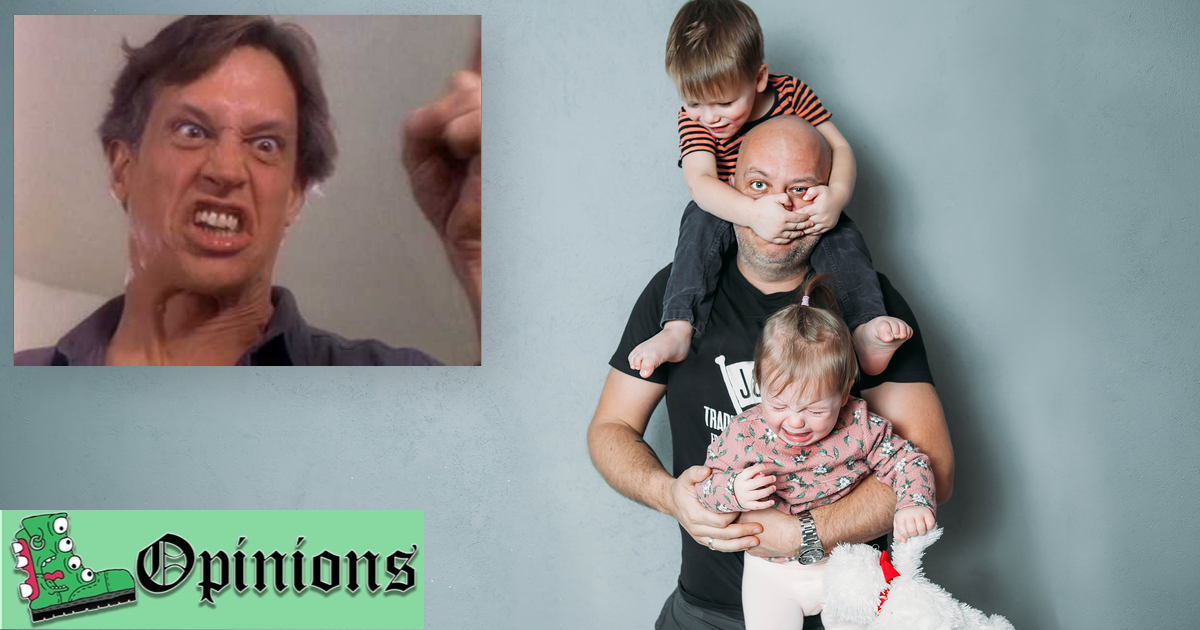 I used to be one of those metal kids who thought it was cool to piss off your parents by blasting ungodly music at even ungodlier decibel levels late into the night. Even on weeknights! But that’s all changed. In the wake of countless scandals involving abuse, neo-Nazism, and not actually worshipping Satan, I finally see the eye to eye with all those angry dads from metal videos in the 80s.

Look, I’m forty-five with a crap job, three kids who hate me, and severe gastric reflux. Besides injecting Prilosec directly into my esophageal lining, my days mostly consist of pining after my youth spent hanging with my friends and blasting some killer tracks. Mötley Crüe, Poison, Guns N’ Roses: I’d heard all their radio songs. And I related to their rebellious spirit.

Hell, the first time I saw Twisted Sister’s video for “We’re Not Gonna Take It,” I was furious at the dad punishing his kid for playing music too loud. Why couldn’t he just let the kid enjoy his music?! Now I watch it with a whole different light. Now I see an ungrateful kid who left dinner after barely touching the food his dad spent his limited time after work cooking. And instead of doing his homework, this little dick decides to blast music with no regard for the aural space of everyone in the house. The dad, obviously overworked and stressed out, tries to communicate with his son about the noise. And how does this shit-pickle respond? By strumming his guitar so loud that it LITERALLY blasts his poor father out of a second-story window and onto the pavement. What a piece of shit, entitled brat! We should also look into harnessing that guitar force-push technology in case Iran gets all pissy again.

While we’re on the subject of shitty kids, look at Motorhead’s video for “Killed By Death.” You got a bratty teen daughter interrupts her parents’ TV time to announce that she’s going on a date with her biker boyfriend. They reasonably ask her to wear something more appropriate and she goes absolutely ballistic. Seconds later, the boyfriend shows up and drives his bike right through their living room wall like the Kool-Aids man, scoops up their daughter, leaves tire tracks all over the carpet, then drives through another wall and escapes to the street. I sure hope he knows how to replace drywall but if my daughter’s biker boyfriends have been any indication, fat chance!

Lastly, there’s Suicidal Tendencies’ “Institutionalized.” Yeah, yeah. It’s hardcore, not metal. Don’t talk back. Anyway, you’ve got the lead singer—a term I’m using loosely in this case—mumbling his way through the whole damn song. He eventually stumbles over to his parents’ house, where his dad is trying to enjoy a pleasant day, mowing the same patch of grass over and over. Then he starts whining about how he wants a Pepsi and can’t bear the thought of getting it himself. The poor dad loses it and starts mowing the driveway out of frustration! Poor guy. All he wanted was a fucking son he could brag about at the Elk’s Lodge.

So you can keep your rebel-without-a-cause attitude, I’ll be siding with all those mistreated dads. I gotta say I am pretty darn disappointed in how those kids acted towards their caring parents and if my kids ever talk to me again I’m gonna make sure they turn out better.