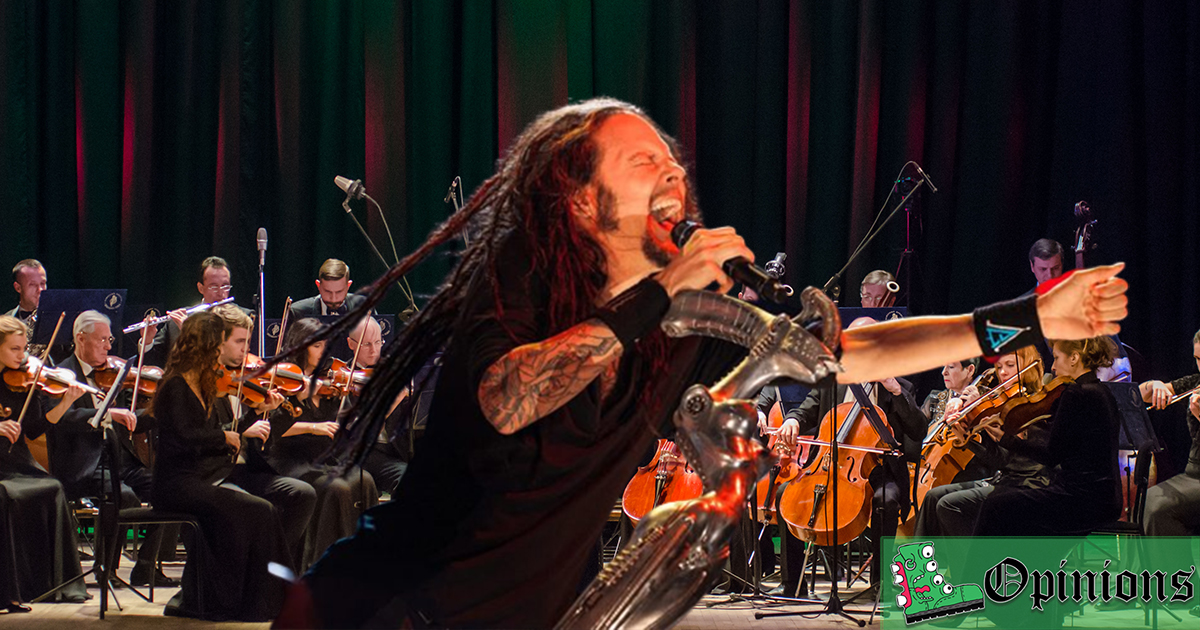 When I first heard Metallica was doing another album with the world-famous San Francisco Symphony a few years ago, I was like, “Symphonies are for dorks,” but I was also like, “That should’a been Korn.” If it has to be done, Korn is the band that should bring the mosh pit to the Sydney Opera House–or at least the San Jose Center for the Arts–because Metallica is lame.

There are so many reasons why this is a great idea, and absolutely all of them have something to do with the 24-ounce Monster Energy I shotgunned five minutes ago.

I CAN TASTE COLORS!

For starters, Jonathan Davis is an accomplished multi-instrumentalist. Can you imagine some sick-ass symphony motherfuckers backing the band on “Shoots and Ladders”? Picture Jonathan Davis walking out on stage killing the bagpipes while a bunch of Ibanez 7-string violins in drop D tuning shred with Head and Munky. You know that would be sick. Obviously, Jonathan will wear a kilt, and symphony bastards love multicultural motherfuckers.

Scatting is art, and we need to normalize having a weird, thin mustache and spontaneously bursting into fits of syllabic seizure.

Sure, Metallica has a long history of dynamic songwriting, virtuosic solos, and a massive base of rabid fans that make them a natural fit to play a show with the fancy band geeks, but Korn would definitely do it better.

Never forget that Metallica sold out, dude. James and the boys have been releasing an endless stream of absolute turds since “And Justice for All.” Know who never sold out? Korn. They never stopped making greasy music for the children of under-educated Midwesterners when they got popular. Maybe it was the meth. Maybe it was the continuous lyrical rehashing of unprocessed childhood trauma. Maybe they’re just physically unable to play different chords or strings or tempos. Who knows?

Bottom line: “A.D.I.D.A.S.” would sound better with bassoons and French horns. Plus, Korn shows are the only public place I can wear my Lee Pipes without ridicule.

Now, point me to a hospital. I CAN HEAR THE DEVIL TAKING A SHIT.