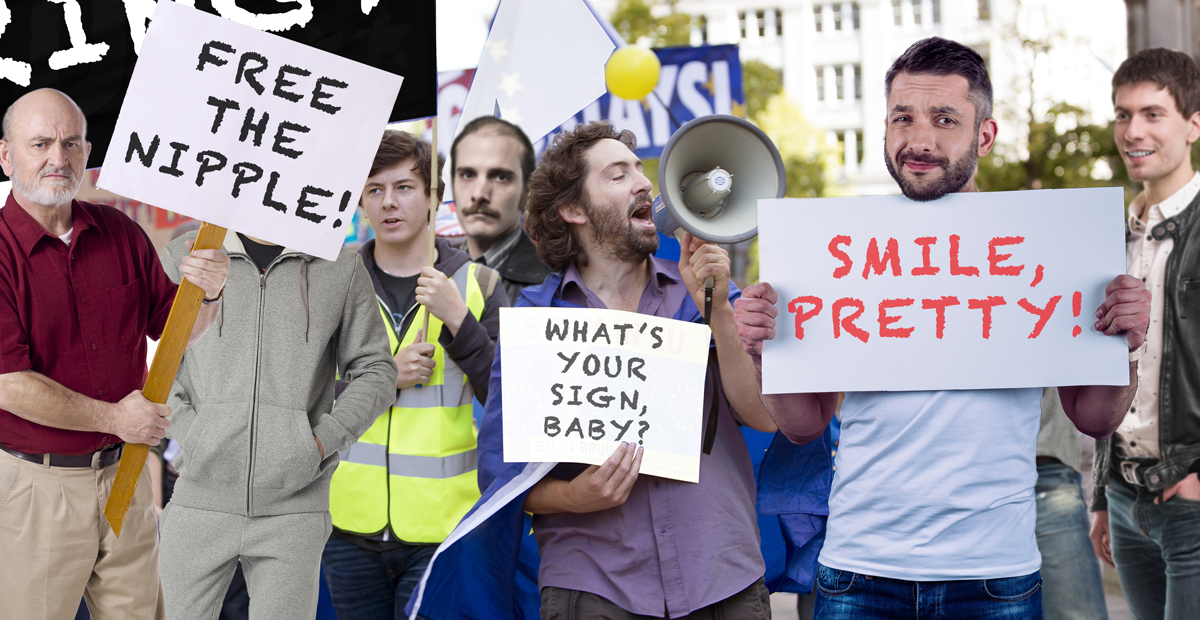 WASHINGTON — An estimated 200,000 women are taking part in the first-ever Women’s March on Washington today to protest the inauguration of President Donald J. Trump. However, to the surprise of event organizers, the parade will be uncomfortably followed by another, unpermitted demonstration: the Creep’s March on Washington.

Unlike the Women’s March, the Creeps claimed their demonstration was not politically motivated.

“I just saw a bunch of sweet, sweet ladies were gonna be in Washington today,” said Creep’s March participant Randy Ritchie. “And, since I’m one of the nice guys, I wouldn’t want these babes walking the streets of D.C. unattended. There are all kinds of weirdos out there.”

Ritchie insisted the Creeps were simply there to “support the women marching.” “Hey, your sexy body, your sexy choice,” he said, holding a sign that read, “Smile, Pretty!” “I just hope that choice involves a little bit of ol’ Randy Ritchie.”

Marvin Longstreth, Ritchie’s college roommate, traveled from Steubenville, Ohio to march in solidarity with his friend. “I’m just hoping to meet one of those nasty women I keep hearing so much about,” said Longstreth over chants of “Free the nipple!” from the all-male crowd.

Longstreth admitted that women’s safety is a major concern for him. “That’s why I started this petition for all women to have my number. For protection,” he said, handing over a blank clipboard. “I want every woman in America to have access to me, anytime, day or night, if they need it. And if they want to send me photos so I know who to protect, that’s cool. That’s cool.”

Surveillance video shows the Women’s March tried to follow its planned route down Independence Ave., but switched sides of the street several times, trying to shake the Creep’s March.

“We all took fake phone calls to try to get the Creeps to stop following us,” said activist Rachel Mackee, peering nervously over her shoulder. “We even took a turn that wasn’t on the parade route at one point, but there [the Creeps] were, right behind us.”

Update: The parade did end safely, but Women’s marchers ultimately skipped plans to meet at the bar after, instead leaving early to create a 200,000 person group chat to let each other know they made it home safely.