‘What Time R U Playing?’ Texts Friend with No Intention of Coming to Show 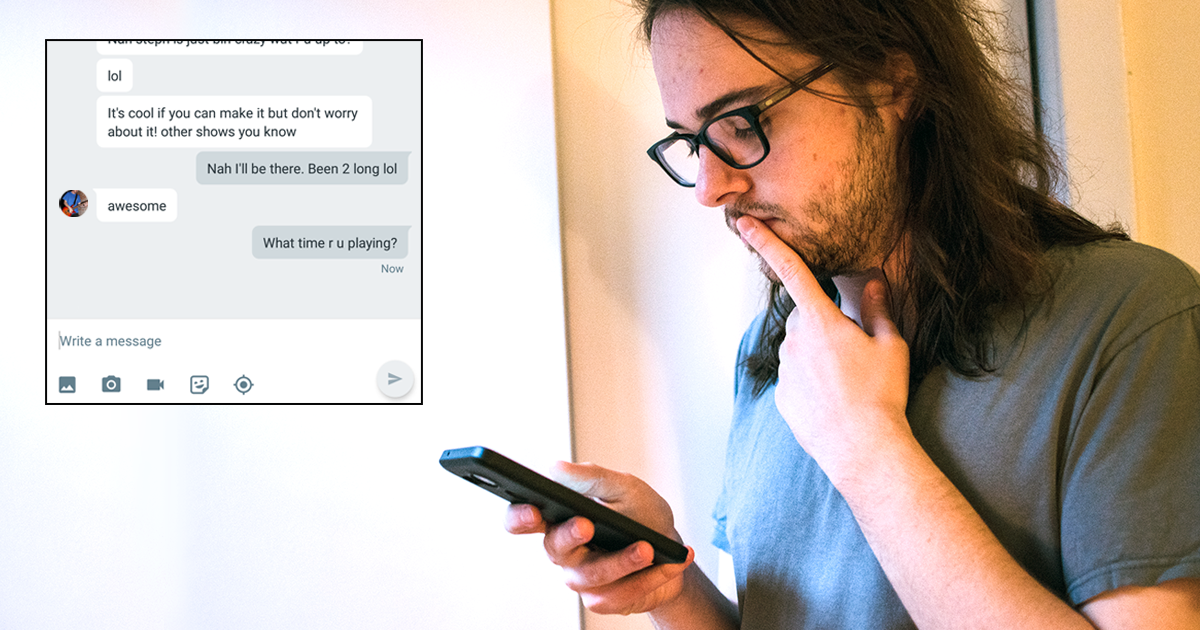 CHICAGO — Swamp Smut drummer Logan Stone discovered a text message following his set on Thursday night, reading, “What time r u playing?”, sent from a long-time acquaintance a full 46 minutes after the regular time any band plays, according to testimony from Stone himself.

“I totally sent that dude a Facebook invite,” said Stone, loading his gear back into the van and pulling out his phone. “Look — you can see he viewed the invite. I even posted the lineup and set order earlier today on Instagram and he liked the photo. What’s this guy’s deal?”

Jack Murphy, the texter in question, who has known Stone for a number of years but has never seen any of his bands, inquires frequently about shows, according to Stone.

“Every time I run into him, he asks when the next show is and says how he ‘really needs to make it out one of these days.’ I saw him at this same venue a week ago for a Simpsons trivia night, so it’s not like he can’t get here. Why does he even ask?” said Stone rhetorically.

On one occasion, Stone reported, Murphy “almost” attended a show. “He told me he was coming for sure,” Stone said. “Then he texted 5 minutes before my set to see if I could get him, his girlfriend, and his girlfriend’s friend in for free, and if dogs were allowed in the venue. I told him it was a charity show for a local women’s shelter and we didn’t have a guest list — I never heard from him again until tonight.”

Murphy, upon hearing he’d already missed Swamp Smut’s set, allegedly responded, “Damn dude can’t believe I missed it, I’m like almost there. OK, turning back around and going home. Text me about the next one for sure tho!”

When reached for comment, Murphy was found in his Chicago apartment, located only minutes away from the venue. Timestamps on the texts corroborated by Murphy’s roommate verified that Murphy was wearing sweatpants and watching his sixth consecutive episode of Breaking Bad throughout the text conversation.