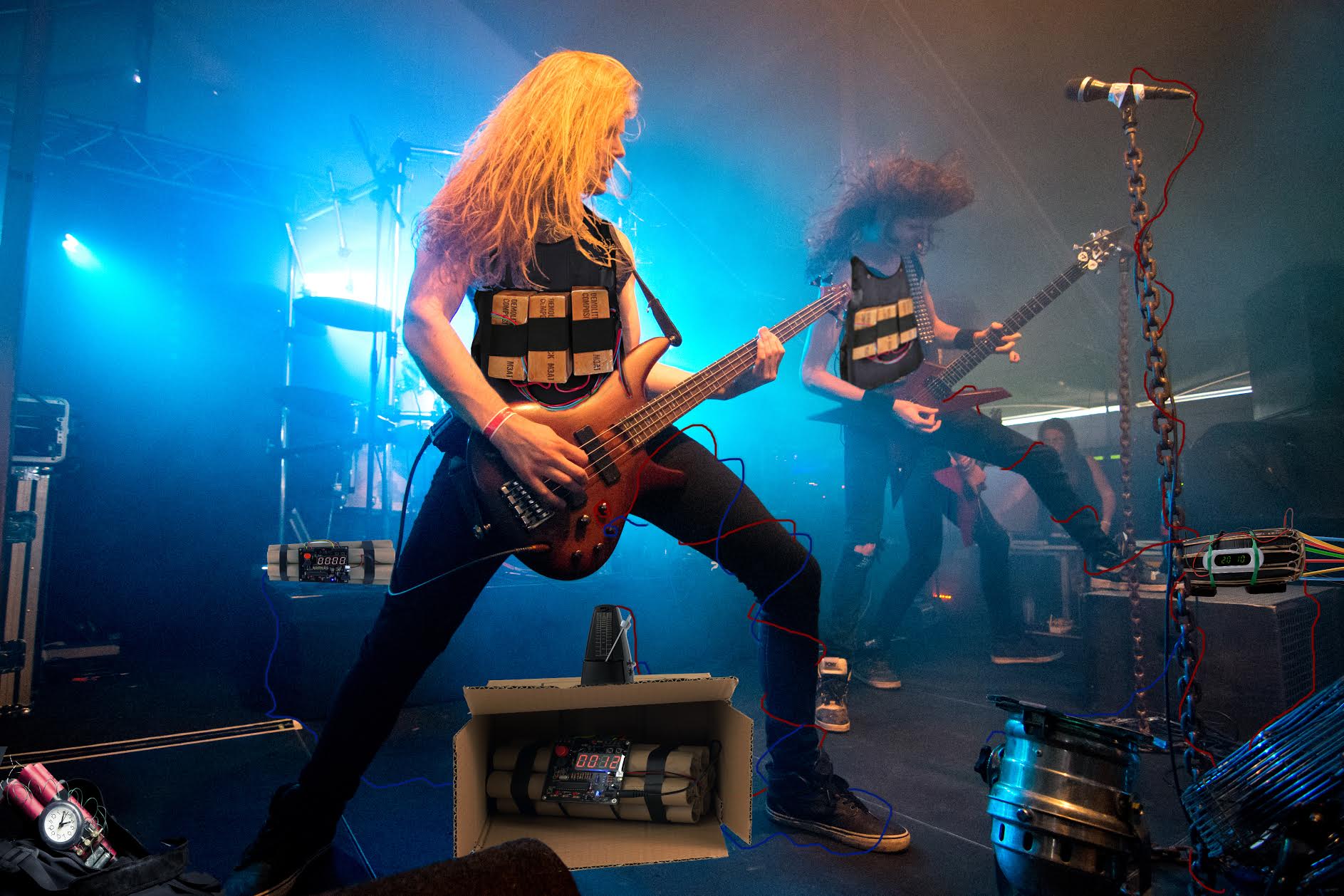 SEATTLE — A mad bomber wired local speed metal band Adrenaline Enema to explode if they play at less than 300 BPM, according to ongoing police reports, with their planned 35-minute set now entering its sixth hour of blistering riffs at famed venue The Black Lodge.

Demolitions expert Sandra Bigelow was the first to connect the bomber’s speed monitors to the Jägermeister wristbands Adrenaline Enema wore for the show. “The sick bastard stuck sensors in [the wristbands],” Bigelow said. “It’s the perfect plan: no metal band would turn down free, hard liquor schwag.”

Tragedy struck early when rhythm guitarist Todd “Warpig” Horowitz detonated a half hour into their set, catastrophically slowing down just long enough to take a swig of beer.

“The funny thing is, they still sound exactly the same,” Bigelow observed, pointing at the smoking, viscera-stained crater where Warpig once stood. “When he exploded, it really lit a fire under the asses of the other guys — I’ve never seen anyone shred like that before.”

“I got the call as I was holding down the merch booth,” said Samantha Rabat, the band’s manager. “I thought maybe it was a joke… and then we saw what happened to Todd. We were too late.”

The surviving members of the band have been outfitted with IV drips of vodka and Red Bull to keep them appropriately “amped up,” according to first responders on the scene. Police have since set up a perimeter of sandbags and Plexiglass around the stage to protect the ongoing mosh pit, raging in solidarity.

“It’s also to keep them from getting onstage,” Bigelow admitted. “If just one person tries to play air guitar with the band, it could distract them — and then we’d have a real disaster.”

Having run out of prepared lyrics hours ago, frontman Alec Cavolo has spent most of the night screaming his last will and testament, including how to care for his many cats and a bequeath of rights to the Adrenaline Enema catalog if the band perishes.

UPDATE: The identity of the bomber has been revealed, according to Rabat. “It’s Terry Gill, our first drummer,” Rabat said. “No wonder I kept getting all those ‘WHO’S NOT FAST ENOUGH NOW?!’ texts.”

Bigelow, surprised by the revelation, remained resolute. “They teach us at the academy that drummers are usually beyond suspicion in any situation that requires cunning, forethought, and intelligent planning,” said Bigelow, headbanging to the 46th extended solo of the night.