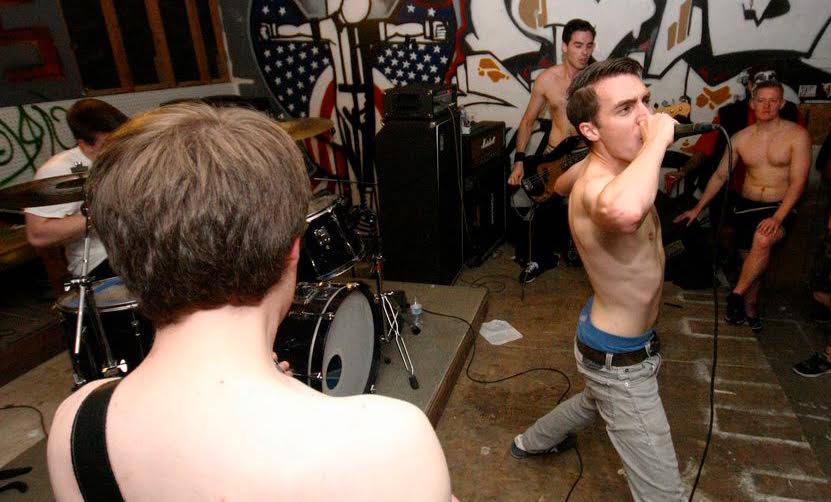 BALTIMORE – Touring hardcore band Punching Down involuntarily added a new member to their lineup last night when a shirtless man near the stage was absorbed into the band, according to multiple witnesses.

“It was crazy!” fan Conor Gilbert said. “This dude was up front all night, shirtless as all fuck, singing along to every word. But when the singer wanted anyone who knew the lyrics to ‘Fistfight Hate’ to join him on stage, the shirtless guy just… well, he became part of them!”

“I didn’t think much of it at first, you know? Fans join hardcore bands on stage all the time,” said Brandy Mor, 24. “But when the song ended, he grabbed a guitar and counted off the next one in their set, and next thing you know, the show’s over and he’s breaking down equipment and jumping in their van for the next stop. He was lugging a bass drum and thanked me for coming out.”

Members of Punching Down were unfazed.

“Oh shit, really?” drummer Mark Hines said moments after asking the shirtless man to look up directions for the next tour stop. “I gotta be honest — we change members so often it’s hard to tell who’s even in the band anymore. I seriously don’t care as long as you’re cool being shirtless in front of strangers.”

“Yeah, that’s how I can usually tell, too,” the shirtless man added while applying a stick of deodorant the whole band was passing around. “Though it gets confusing at basement shows or bars with no AC.”

“I don’t think the situation is that weird,” the shirtless man continued later while checking the merch inventory list. “I get hot at shows, so I’m practically never wearing a shirt. This kind of thing happens every month or so. I’m not even from here… this is just where the last band’s tour ended.”

Update: While on the road with Punching Down, the shirtless man grew out his goatee and has since been absorbed into an entire Nü-Metal tour package.