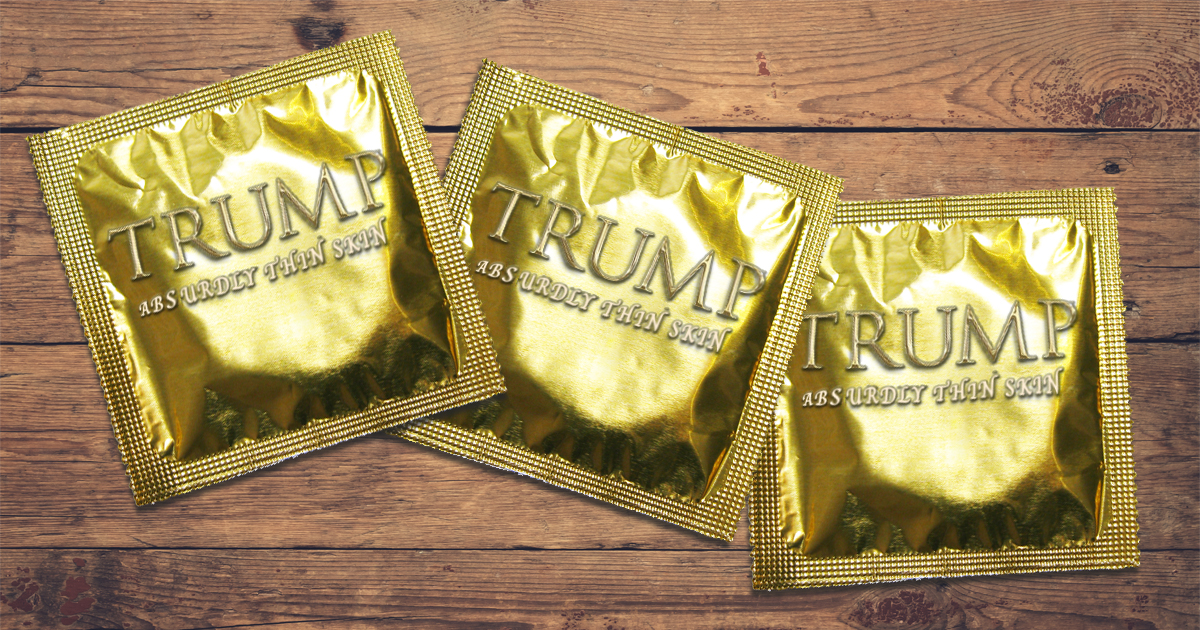 NEW YORK — U.S. President-elect Donald J. Trump held a press conference this morning to announce the manufacture of Trump Condoms, his latest namesake business venture, which will feature a gold foil-wrapped contraceptive touted as having the thinnest skin ever to hit the market.

“These condoms are really something, really terrific,” the incoming 45th President told reporters. “The slightest touch, be it real or imagined, will create a sensation that goes way beyond what mainstream condom companies would call ‘appropriate,’ folks, and I mean that — big league.”

But the prophylactics have faced a great deal of criticism even before their official release. Leaked developmental records show the condoms failed numerous stress tests, with one report describing them as “too delicate to be considered a qualified option.”

“Oh, I see. Durex, Trojan… they can advertise as ‘Ultra-Thin,’ but when I do it, I get treated this way? Unfair,” Trump said. “Very unfair, folks.”

“While the skin may be thin, it doesn’t mean the condoms lack strength,” said Kellyanne Conway, Trump’s former campaign manager. “Consumers can trust [Trump Condoms] will be durable even in the most stressful scenarios.”

“Never mind what these elitist product testers with their obvious agendas said in those reports — these things are tough. Real tough, folks,” Trump added. “And with that thin skin, you’re gonna feel a lot of sensitivity, believe me.”

“I can absolutely see why the average consumer would be sold on these claims,” said Michael Kroehn, senior writer for Consumer Reports. “But we’re talking about condoms here. There is such a thing as over-sensitivity. And while it may feel good in the moment, trust me — it’s not going to be worth it when that thin skin inevitably breaks and then you have a disaster on your hands.”

The President-elect responded by posting 17 tweets within a three hour time frame, chiding “loser” Kroehn and the “dishonest” Consumer Reports for biased reporting.

Trump Condoms are expected to hit shelves in Spring 2017, according to representatives from the Shanghai factory commissioned for manufacture.