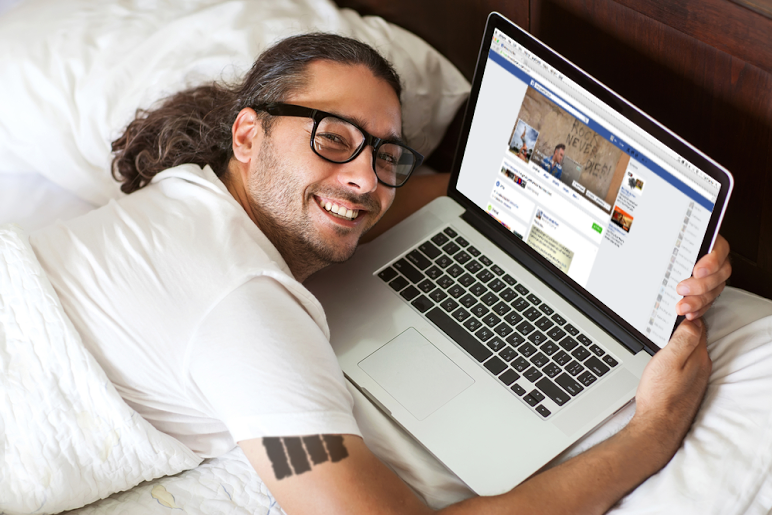 SPOKANE, WA – Local Facebook user Josh Larson was “on cloud nine” following the acceptance of his friend request by semi-popular indie rock musician Kyle Clareborn, according to sources close to the joyous fan.

“I couldn’t believe he was on Facebook at all,” said Larson, barely able to contain his excitement. “He must get hounded by fans all the time. Man, I grew up listening to him playing with Metro Birds. The account must be fake, right? Under occupation it says ‘Cook at Antonio’s Pizza,’ but it looks exactly like him and there are old pictures of him playing guitar. Dude! This is crazy.”

Larson initially tracked down Clareborn after finding a stack of old show flyers under his bed during a recent trip to his parents’ house.

“I spent the whole weekend bored out of my mind, so I started searching for members of all these bands I used to love. I took a screencap of the accepted request and sent it to all my friends,” said Larson, spinning around in his computer chair. “Kyle must have accepted my request because we met when he sold me the Metro Birds EP after a show in Boise in 2008. I know I asked him that night where they were playing next. I should message him and see if he remembers. It was a great night for both of us, I’m sure.”

Monique Garner, a freelance social media specialist, says Facebook friendships like this are very common, and in fact often go unnoticed by the user accepting the request.

“We see this all the time. Musicians meet a lot of people on the road, and it is impossible to remember if a friend request is coming from a legitimate friend that has lost touch or an over-anxious fan who will flood your feed with statuses about Game of Thrones,” said Garner. “Just imagine if they got followed back on Twitter. Their poor little heads would explode.”

When reached for comment, Clareborn said he was not aware of the significance of accepting Larson’s request.

“Listen, I barely ever use Facebook. My kid is always fucking around on my phone and probably hit ‘accept’ by accident. I’ve wanted to delete my Facebook forever, but it just too many steps so, whatever. Fuck it,” said Clareborn. “But, hey — while I have you here, watch out for a Metro Birds reunion in 2017.”