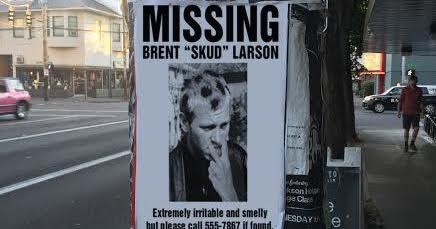 VICTORIA, Texas — The parents of a man who has been missing for over a week is desperately hoping someone out there has a photo of their son that doesn’t make him look like a total embarrassment to his entire family.

Brent Larson, who answers to the name “Skud,” was last seen Tuesday night panhandling outside the Spec’s Liquor Store on the corner of Navarro and Sam Houston Street before drunkenly wandering off to, as one witness stated, “go spelunking for strange.”

“The subject is a white male, seen here in this photograph making the rather distasteful universal sign of giving a woman oral pleasure,” Deputy Lana Singer announced at a press conference late Thursday night.  “Unfortunately, this is the most recent, and least offensive, picture we have of Mr. Larson. We do have an elementary school yearbook photo, which is also included here, but we must stress that the subject no longer wears Oshkosh BeGosh, nor is his hair kept in a bowl cut fashion.  Also he’s 32 years old, a very rough looking 32 I am told.”

Though police have stated they are putting every available resource on the case, Brenda Larson, Skud’s mother, is concerned that the current photograph will only serve to publicly shame her as a mother.

“He’s such a sweet boy, but he hasn’t taken a decent picture since fifth grade,” Larson said while gently stirring her brandy with a straw.  “It’s a nightmare. What will his father’s clients think?”

Friends of Larson were able to provide multiple photos where he is pictured pretending to eat animal feces off of a sidewalk, performing mock analingus on passed out partygoers, or fully naked covering his genitals with a 40 ounce beer bottle. The family is asking for anyone with a recent photo of Larson that doesn’t contain vulgarity to come forward.

Friends of Skud, however, argue that the offensive photos might just be the key to locating the missing man.

“Yo, I’ve never seen Skud not being a total jag-off,” says longtime friend and stick-n’-poke artist Dan Hernandez. “Dickishness is sort of his calling card.”