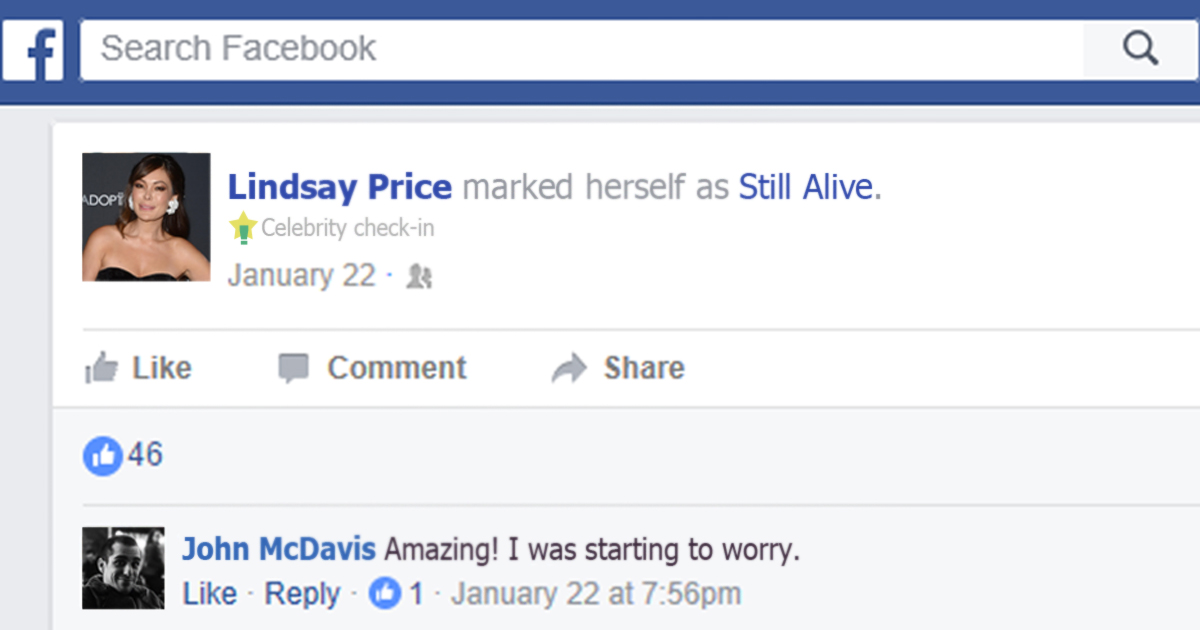 MENO PARK, Calif. — Facebook unveiled a new “celebrity check-in” feature earlier today to enable the world’s most famous people to notify friends, family and fans that they are still among the living, according to a press release from the social media giant.

Company CEO Mark Zuckerberg announced the new feature in response to the high number of celebrity deaths in 2016. The death toll prompted many individuals to assume every famous person to ever live had already passed away with the start of the new year.

“America, and the world, loves celebrities. At Facebook, we want to bring you closer to them by allowing each celebrity to periodically click a button that says, ‘I am still alive,’ just so our users no longer have to worry,” said Zuckerberg. “If they don’t check in at least once a day, Facebook will automatically inform the world of their tragic, untimely passing.”

The function is similar to Facebook’s already well-known “check-in” feature, which allows non-famous individuals to notify loved ones if they are safe following nearby train derailments, school shootings, or other tragedies involving unimportant people around the world.

“I am so glad I can find out if the woman who played Janet on the last seasons of Beverly Hills 90210 is still alive,” said avid Facebook user John McDavis. “I was just about to write a multi-paragraph tribute, reflecting on how her balance of work and romance with Steve Sanders inspired me to marry one of my co-workers. But then I saw she was okay, and I didn’t click ‘send.’ I will keep a close eye on her, and when she dies, I’ll have this ready.”

“In 2016, we lost David Bowie, Prince, Zsa Zsa Gabor, and at least three of The Monkees, to name our biggest losses,” Sandberg said. “We think this is the best way to keep everyone informed. The health and safety of the various character actors and session musicians who are now the only entertainers still living is vitally important, since every actual famous person seems to have died last year.”

Facebook also announced plans for a new “Celebrity Live” feature, which will allow Facebook users constant, uninterrupted, live streaming access to their favorite stars at the push of a button.