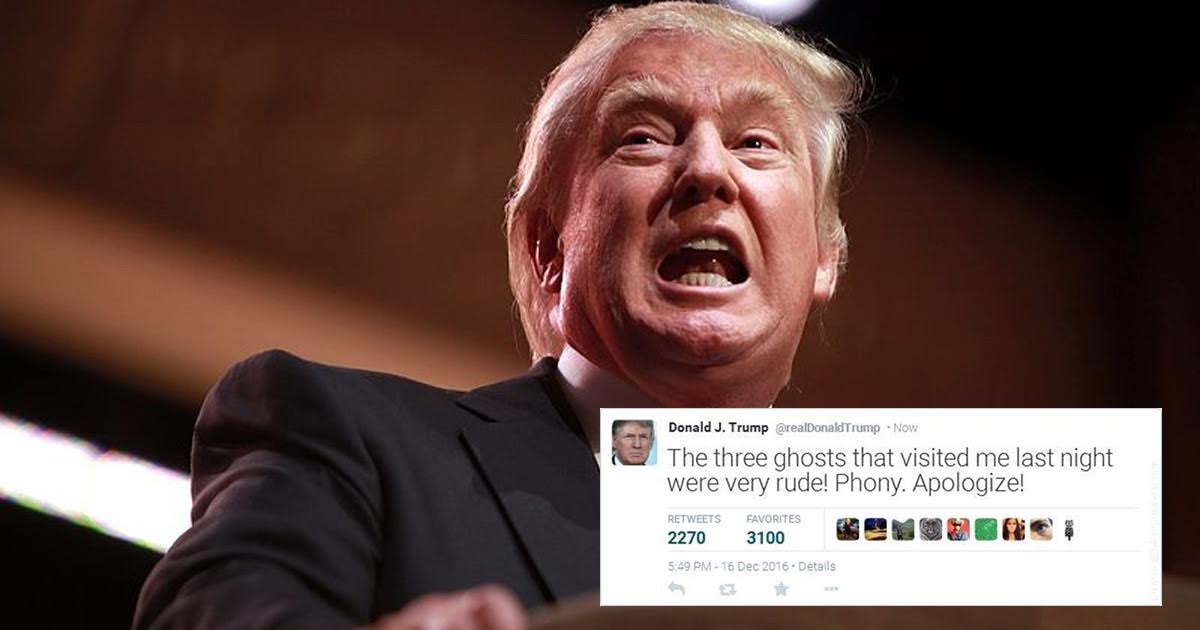 NEW YORK — President Donald J. Trump is on the attack again, this time angrily tweeting about three spirits who allegedly visited him late on Christmas Eve in an attempt to teach him the true meaning of the holiday.

“This Ghost of Christmas Past broad shows up unannounced — nasty woman, real Sarah Lawrence-type… she starts dragging me all over, took me back to military school, saying stuff like, ‘Oh, look at you hazing that poor student on Christmas day. You shouldn’t have done that,’ Trump recounted via phone early this afternoon. “The fact is, I looked very good in that uniform — believe me, believe me.”

Trump, calling himself “a veteran of nine Christmas wars,” seemed particularly sensitive to criticism of his own military history. “I got more training Christmasly than a lot of the guys who go into Christmas,” he said of his schooling at New York Military Academy.

Secret Service agent Kevin DeLuca confirmed the first two ghosts were precluded by an apparition of Roy Cohn, the deceased former attorney who gained national attention during the McCarthy hearings, clad in chains and old rags. “At first [Trump] thought it was another hallucination,” DeLuca recalled. “He gets those when he eats too many Trump steaks right before bed. But I saw Cohn, too. Trump demanded I fire at him immediately — which I did, to no effect.”

Trump was not willing to comment further on the Ghost of Christmas Future, whom he described in a tweet as, “Tall, very black robes, mostly shadow. Sad.”

DeLuca later shed some light on the Future ghost’s vision. “No christmas lights, no christmas trees… no trees of any sort, actually. A quiet I’ve never known. There was just… nothing. Oh, mother of God!”