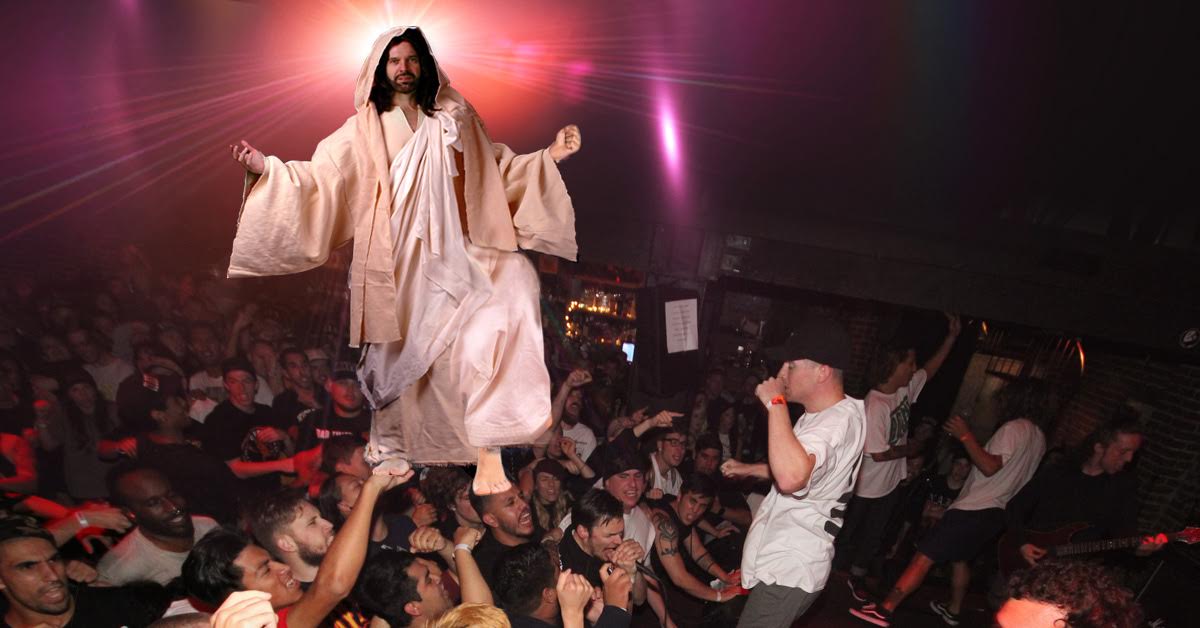 BOSTON – Attendees of a Sunday hardcore matinee were both stunned and blessed to witness the resurrection of revered holy figure Jesus Christ.

Christ, 33, was first spotted around noon floating majestically above the surface of a flooded pothole outside of The Cathedral, a local DIY venue.

“I couldn’t believe my eyes,” said local show promoter Chris Thomas. “He walked right over that pot hole. You have no idea how many times I stepped in that fucking thing and soaked my Air Maxs.”

The man seen as the Messiah by Christians the world over then proceeded to “go off hard”, according to multiple reports from the pit.

“It was totally bonkers,” said Violence Brigade frontman Seth Pompan. “That dude in the robe and sandals was just wrecking shop, then he barrelled through the pit windmilling at speeds I didn’t think were possible. I always heard the guy was anti-violence, but I saw him knock a guy out cold during the first breakdown.”

The son of God then ran onto the stage and marched atop the heads of show attendees well into the middle of the venue.

“I’ve never seen a head walk that lasted that long. Ever,” said Luke Herrod, whose earlobe was torn when Christ’s sandal reigned down upon it. “He was up there going off hard for the entire song about getting stabbed in the back. I’m talking two solid minutes. He got at least 17 heads deep. It was, like… a miracle.”

Not everyone in attendance was impressed by the return of the Lamb of God.

“I was selling merch for DFD and the long-haired guy comes up screaming about how we shouldn’t be buying and selling at hardcore shows,” said an irate Meghan Forbes. “Out of nowhere he flips the merch table and just starts pitting like a maniac. Get out of here with that crap. I’m gonna turn my back on that shit every time.”

After making his way to the stage, Christ grabbed the mic and asked that audience memebers “walked with him”, shouted out the area code for Nazareth, and ascended back into heaven — but not before turning the venue’s toilet water into toilet wine.