BREAKING: Oh Fuck, This Is A Nazi Band 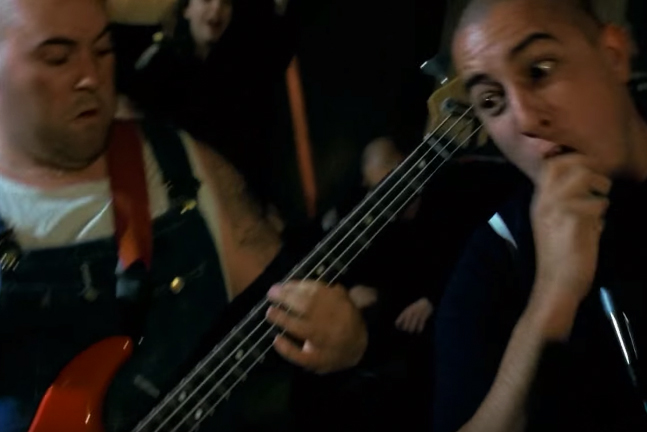 [Editor’s Note: What follows is a first hand account by veteran Hard Times reporter Don Smalls, who was on the edge of the pit as this breaking news story unfolded.]

ORANGE COUNTY — During the first song it was unclear. The second song was kinda sketchy but still flew under the radar due to the PA system obscuring most of the lyrics. But now? After that fucking speech? There’s no getting around it: This is some stupid fucking Nazi garbage.

Everyone seemed pretty into Iron Fist’s raw style (and undeniably cool imagery), but as soon as the singer started spewing that 100 percent Nazi bullshit in between songs we all knew. Fuck, this is a Nazi band.

I was trying to withhold judgement on the band’s political beliefs. I mean, they kept talking about patriotism and honor, which isn’t necessarily bad. And the bassist kept yelling that it was about heritage — that probably should have been a red flag. But it was when the singer’s speeches got into some straight up Gangland: White Aryan Brotherhood shit that I really knew. As soon as he introduced a song about ‘racial realism’ I was out. Fucking out.

I certainly wasn’t paying close enough attention to what is now clearly vile, hateful lyrics that sound like someone reading shit off an anonymous internet comment section.

Now I just wonder when they’ll stop playing. Or maybe I can just dash for the exit. Oh goddamn it. Look at all those big-ass boneheads waiting by the fucking door. Will they care if I’m 1/4th Canadian? Just gotta avoid eye contact with the dude wearing some sketchy armband and brass knuckles over his tattoo of brass knuckles. Fucking Nazis.

Okay yes, I’ll admit I was nodding along to some of the earlier stuff before the band made their beliefs known, but I stopped ASA-fucking-P. I’m only here because my buddy is bartending and neither of us are racist fucks like those clowns up there. How did this fucking happen? This venue seemed cool. Jesus Christ, the one time there are no cops at the show.

Related: Skinhead Presidential Candidate Just Wants to “Leave Politics Out of It”

The promoter doesn’t seem bothered by these assholes’ militant stance against immigration and those on welfare. I guess they did fill the room on a Tuesday and he probably doesn’t care what backwoods horseshit they try to start a chant about, as long as their friends buy alcohol. Wait a sec… is that a cover up tattoo on his forearm?

Article by Don Smalls with help from James Folta @JamesFolta.