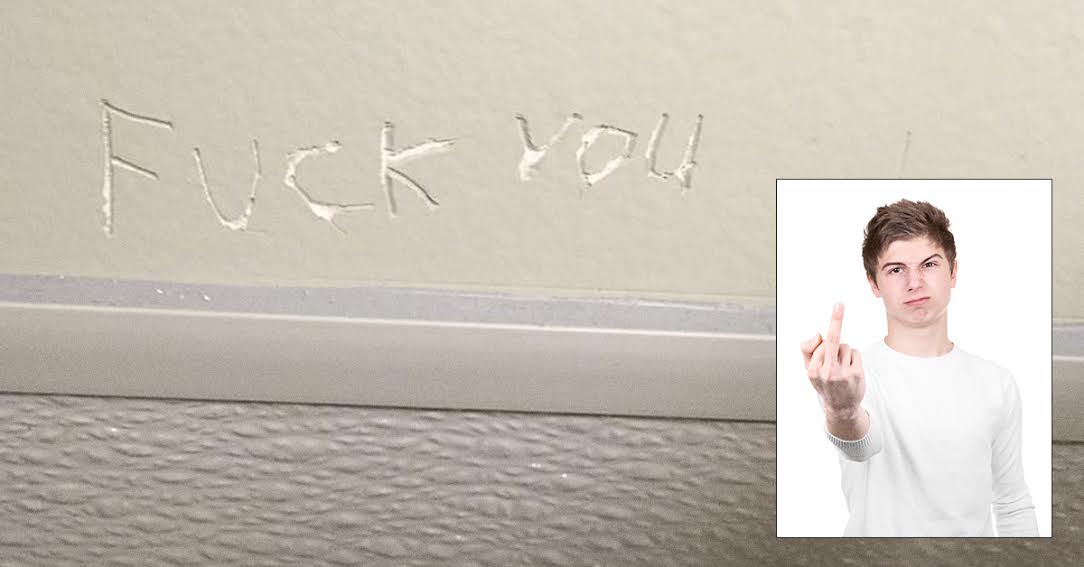 INDIANAPOLIS, Ind. – A masterpiece of vandalism on display in the lone stall of the men’s room inside the Speedway gas station on 86th and Ditch was created by angst-driven graffiti artist Evan Spencer, 16, according to multiple sources.

The acclaimed work of art, crafted via utility knife on plaster, is an inch-high series of capital letters that spell out “FUCK YOU,” carved into the structural wall.

“Yeah, I was pretty fucking pissed off that day,” said Spencer when asked about his work. “My parents were ragging on me to get my grades up next semester and get a job. My girlfriend situation isn’t great. Namely, I don’t have one. So… there’s a lot of rage that just built up. I’m not into sports or band or theater or anything. Tagging that filthy toilet stall where homeless people go to jerk off is the only creative outlet I have.”

Spencer’s previous works in this venue include an anarchy symbol behind the toilet, a giant penis just above the jumbo toilet paper dispenser that spans the stall’s panel, and the phrase “MATT BUSSE IS A FAG!!!!!” on the stall’s door, to the right of the coat hook. As per gallery standard, each piece lasted less than three days before maintenance crews repaired the damage.

“I don’t mind when my art gets covered up,” Spencer said. “It just gives me another blank canvas for further expression. My pieces are meant to be ephemeral anyway… fleeting. Like life, or happiness.”

When asked if he would ever consider another venue to showcase his art, Spencer said, “Man, I’d love to tag a bathroom in the police station or the courthouse. I’d write ‘FUCK COPS’ or ‘NO JUSTICE FOR SPEAKING YOUR MIND’ if I had enough time. Dude, fucking up a higher-traffic stall like that, I’d get my message to a wider audience and touch so many more lives… if I could just get my knife past the metal detectors.”

The piece is expected to be on display until the shift manager gets around to having it painted over. Reports indicate it may be replaced soon after by a crude swastika.