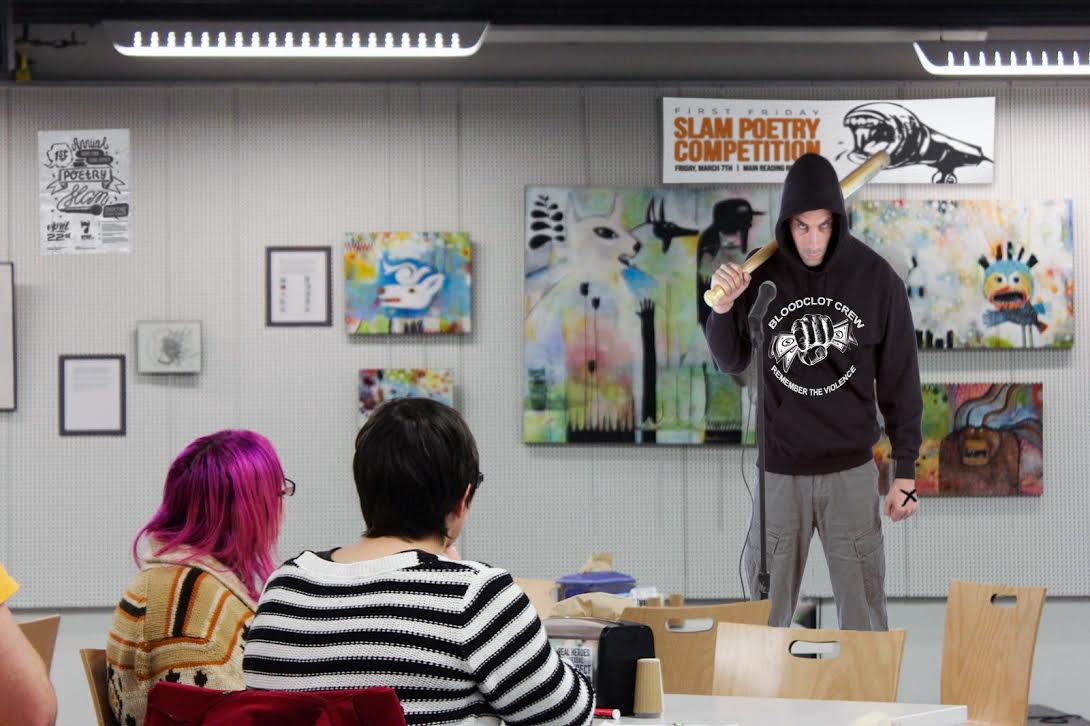 BUFFALO, N.Y. — A monthly slam poetry open mic was ruined late last week by local hardcore musician Russ McGee, who “blatantly disregarded most rules of civility” and “possessed a tenuous grasp of what slam poetry entails,” according to patrons of the Wandering Gypsy Café.

“I kind of thought the guy in the hoodie would be trouble when he kept pacing back and forth in front of the microphone,” said longtime open mic host Janet Klauss. “He was breathing real heavy and pounding his chest… I figured he might be nervous as a first timer or something, but as soon as people started their poems, he’d start kicking and punching the air. It was truly frightening.”

McGee moshed unaccompanied throughout poems observing the changing of seasons and accepting one’s genitalia, but as the night progressed, he grew agitated with the crowd for their lack of participation.

“During my poem ‘The Birds I Once Knew,’ he went to the back of the room and shouted, ‘Let’s open this s-word up, mother f-words,’” said Maryam Flowers, 72. “I’m glad my words moved a young, troubled man, but he made a huge mess when he flipped the coffee creamer table.”

McGee admitted this was his first time attending the normally subdued poetry slam. “After Blood World kicked me out of the band, I haven’t really been welcome at the shows I used to go to, so I need to find a more forgiving scene that won’t overreact when you put a 13-year-old in a coma,” said McGee, still out-of-breath from his moshing. “Everyone here is a little stiff. I thought slam poetry would be a bit heavier, but it’s still way less sad than the comedy open mic I went to last week.”

Klauss was hesitant to say if McGee would be welcome at the next poetry slam due to his violent behavior, but did praise him for his brief poem, “Forever True.”

“The only time he wasn’t scaring everyone was during his poem, which was quite touching. It was all about brotherhood, loyalty, and never giving in — really original and very raw,” said Klauss. “But he did stop to chastise the crowd, saying, ‘I don’t see any of you mother fuckers back there snapping, let’s go!’”