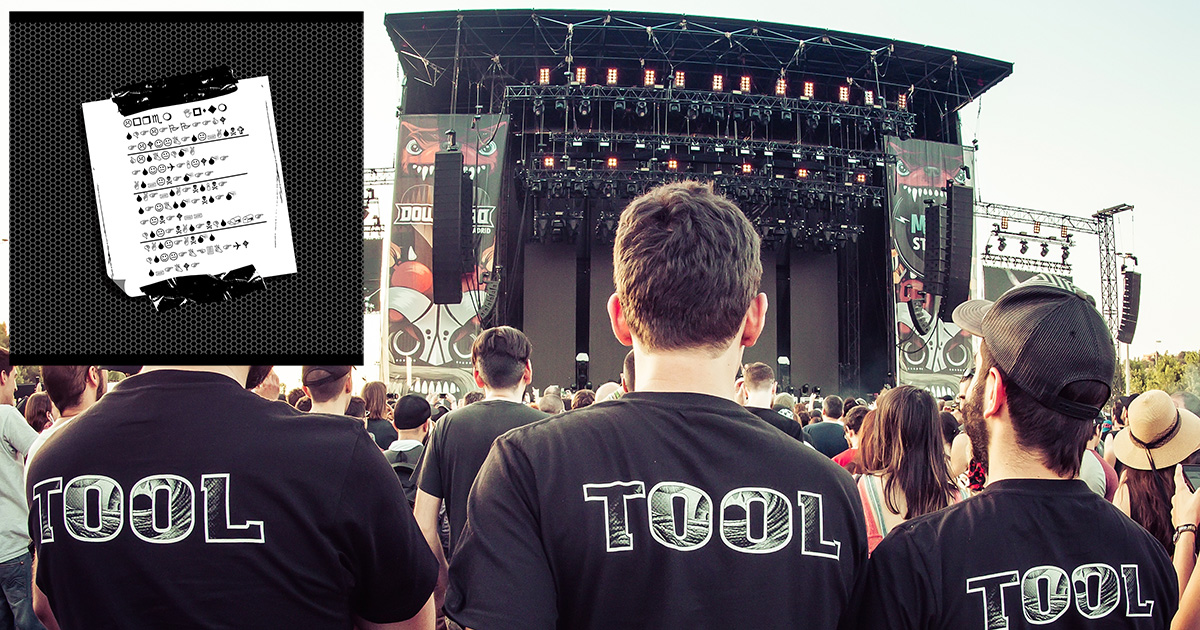 “At first, I didn’t notice anything because their songs have such weird names anyway. A black cube, a weird-looking M and something that resembles an iron cross could easily be the name of a Tool song, perhaps one of their shorter, more accessible 9-minute compositions,” said Lindstrom while displaying the strangely coded setlist. “Then it hit me that I’ve seen this stuff before: on my battered Compaq 20 years ago, when I was looking for fonts that took up more space so I could fill the minimum three pages I was supposed to write for English class. You know the one I mean.”

Kyle Gannon, a roadie who worked with Tool during the “Lateralus” and “10,000 Days” era, was less enthused by the discovery.

“It may seem weird because their fans think the band are mad geniuses and they will pour over the artwork for days looking for ‘clues’ and whatnot. But honestly, most of Tool’s visual identity comes straight out of Microsoft Creative Writer and the clipart they used to ship pre-loaded in the ‘90s,” said Gannon while fixing his ponytail. “You know those pictures of champagne glasses your parents would use to make their New Year’s invitation in like 1996? If you look long enough at shit from that era, you’ll find most of the imagery from ‘Lateralus.’ I’m honestly amazed it took so long for the truth to come out.”

Gary Stahl, professor of semiotics at University of Wisconsin-Madison, confirmed that the setlist was in fact written in the classic ‘90s Microsoft Wingdings font.

“There is no mistaking those symbols. Once I was able to establish that the weird-looking 69 symbol tilted 45 degrees is in fact an ‘A,’ and the kind-of-H-looking-thing is an ‘I,’ that was the Rosetta stone. We have learned the language of their home planet,” Stahl said while excitedly examining the paper with an oversized magnifying glass. “With this new knowledge, we may be able to learn how to communicate with these alien musicians after all. I heard they can play all their songs backwards, that’s pretty cool.”

Tool addressed the faux controversy with a statement to fans that read: