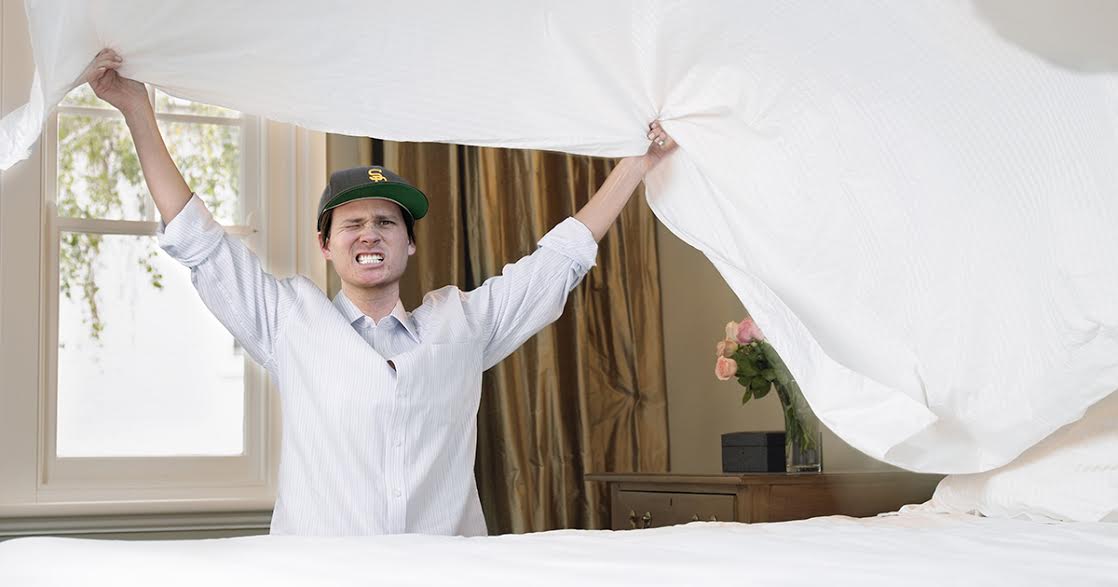 LOS ANGELES – Ex-Blink 182 singer and guitarist Tom Delonge discussed details of his newest material in a video released this morning, revealing an affordable bedding blend of elegant polyester and fine silks to mark his long-awaited return to textile manufacturing.

“After a couple rough years, things are really starting to come together,” said DeLonge, pausing for a brief 17 seconds to stare blankly up towards the sky. “It’s going to be this space-age material — super warm, and able to prevent cell phone signals sent by the CIA and FBI from entering your body while you sleep. We’ve even managed to get rid of the scent of burning flesh from our earlier prototypes.”

Delonge confirmed the release would be a return to themes tackled during his time with Blink 182.

“With Take Off Your Pants and Jacket, we publicly called out a market flooded with cheap, uncomfortable fabric. It was a start, but I soon realized it wasn’t enough,” DeLonge said, his tongue darting quickly out to moisten his cracking outer skin.

“I remember on tour in 2002 — we were staying in some hotel, Travis is next door with a roomful of girls. I’m in my room full of a blinding blue light and I’m just tossing and turning, man, fuckin’… hating everything. A 220 thread count, and you expect me to be able to get a good night’s rest? It’s impossible. I decided it was time for the world to enter the seventh stage.”

“I was sort of hoping for another Angels and Airwaves type of thing,” said longtime fan Julia Sanchez. “But I guess a line of bed sheets that can apparently block all gamma rays is pretty cool, too. I guess.”

“Look,” hissed Delonge, his single vertical-eye slit narrowing in a close approximation of human anger, “I’ve been working with 10 people who are at the highest levels of textile design and you beings are just going to have to trust me. In two, maybe three months, you will see and feel technology you never could have dreamed. This is just one of the many gifts to be given to mankind!”