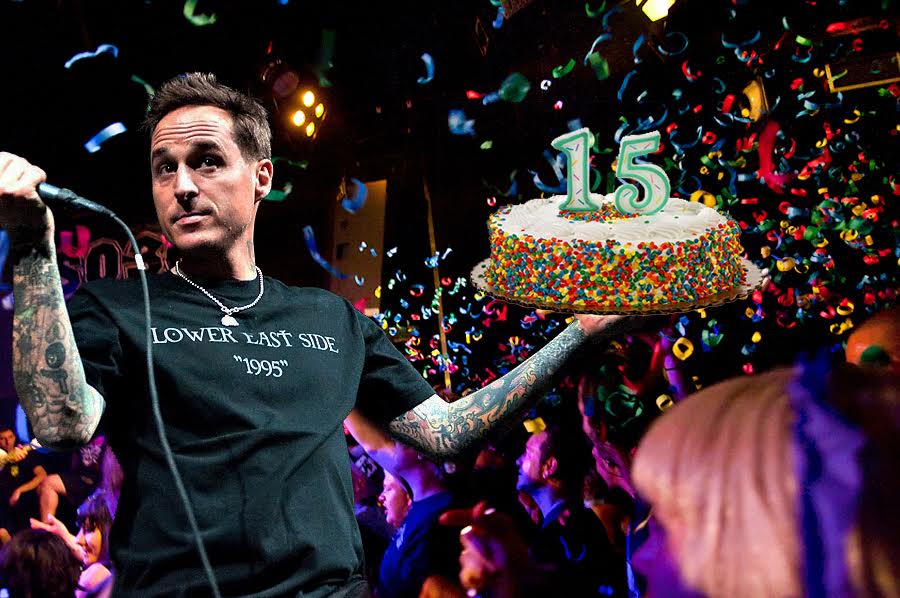 LOS ANGELES – The lines between friend and family were blurred this past weekend as Toby Morse, singer of the massively-influential hardcore band H2O, celebrated the 30th installment of his 15th birthday.

The mishmash of attendees ranged from award-winning actor Michael Rappaport, who amazed Morse by showing up in a stretch limousine, to former WWE Wrestler CM Punk, who came dressed as Morse’s favorite wrestler, Sting, to his son Max, who, at age 13, is quickly catching up to his father.

Morse was allowed to invite upwards of 200 people in an attempt to capture a fraction of his remarkably eclectic friend group which he proudly refers to as “family.”

Early reports indicate that everyone in attendance was thrilled to be there. “I’m glad Toby was able to squeeze this in between all his commitments with Instagram and his daily tattoo regimen,” Matt Skiba said, donning drainpipe jeans and a Hurley T-shirt, signifying his newfound membership in Blink-182.

The annual event is held in various indoor skateparks and Chuck E. Cheese’s in Morse’s hometowns of Washington, D.C., Los Angeles, and New York’s Lower East Side. Morse reportedly has a standing reservation at each location and they each specifically make vegan pizza for the occasion; additionally, all the animatronic bands feature professional skateboarder Steve Caballero on guitar.

Parents involved with other parties at each venue expressed concern about the heavily-tattooed Morse and his friends taking over an establishment usually reserved for young children, but Morse was not deterred. “It’s not how old I am, it’s how old I feel,” Morse said as he gestured over to Ian MacKaye. “You only turn 15 once a year — so do it right.”

Morse spent the majority of the evening exhibiting his remarkable accuracy when playing skee ball, which he completely attributes to his straightedge lifestyle.

As of press time, Morse has withdrawn from the festivities. Those close to the situation claim it is due to a stomach ache from eating too much candy.