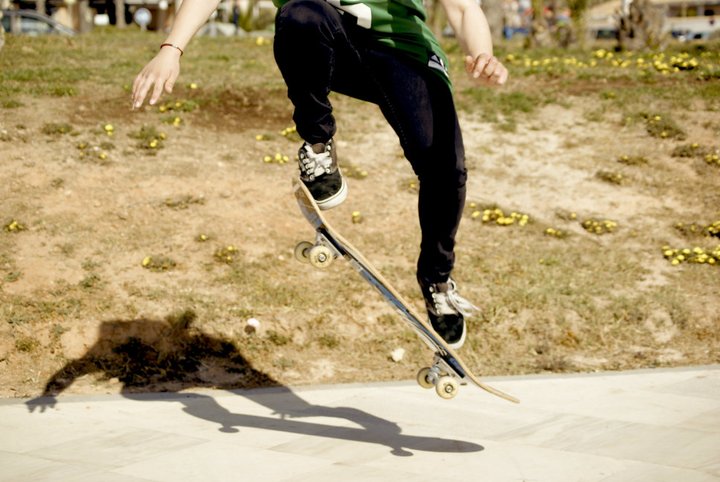 CHICAGO – An eyewitness claims to have seen So-Cal Skate Punk Legends My Society attempting, and failing, to ollie in the parking lot behind the venue hours before doors opened during the Chicago stop of the band’s “Shred ‘Til Dead” tour.

“I’ve been listening to their music since I was 12. Their 2004 album ‘Skate And Die’ got me into skate culture,” diehard fan Randy Erikson said. “I showed up early to the show, hoping to get to say hello and skate with them a bit. I was horrified by what I saw when I walked around the back of the club.”

Erikson claims members of the band were helping each other onto their respective skateboards and holding their bandmates’ hips to guide them forward, and yelling with joy if a bandmate stayed on the board for more than two parking spaces before jumping off. After ten minutes, Erikson says My Society members then attempted to ollie over a crushed Coca-Cola can they found on the ground, but noticed they could barely lift the front wheels off the ground without losing total control.

When reached for comment, vocalist Jim “Grinder” Thompson weighed in, “Nobody was supposed to see that. Skateboarding is fucking hard, it is easier to look like a skateboarder and just sort of, you know, pretend a bit.”

The band admitted that they’ve been learning to skateboard on this tour to get inspiration for their comeback album.

“We never wanted to disappoint anyone,” drummer Brandon Banks apologetically chimed in. “Of course we want to shred, but we are just better at playing punk rock music with fast drum beats – but we have been watching a lot of YouTube tutorials and, at this rate, I might be able to kickflip in two to three years.”

Related: Recently Deceased Punk Icon Was Kind of a Dick

To keep the peace, an ecstatic Randy Erikson was brought up on stage that night to sing the, “Whoa”s in the band’s epic skater anthem, “Bro.”

When asked for comment, Erikson said “I should realized this when I saw the Airwalk sticker on the bass cab.”