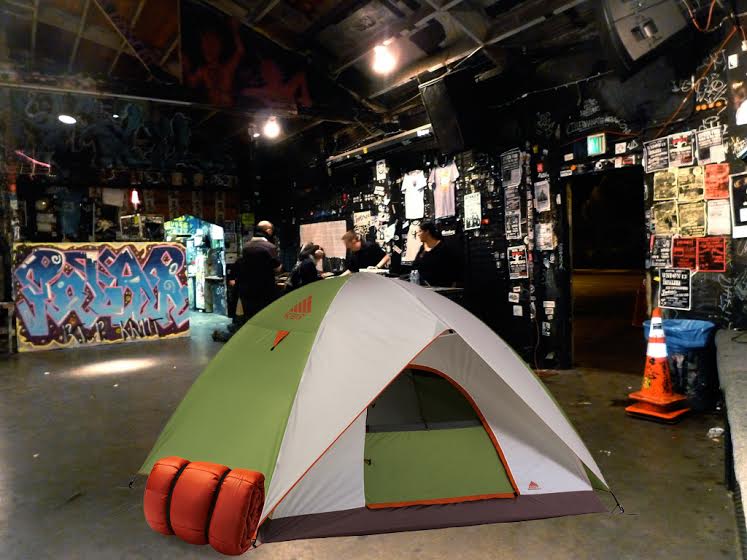 LEXINGTON, KY — According to sources close to the event, last night’s show at The Shit Palace wrapped up at 5:00 p.m. today. The show, featuring touring bands Street Ponies and November Conspiracy, reportedly began at 10:00 a.m. sharp, just 14 hours after the 8:00 p.m. start time advertised on flyers, and lasted for seven hours.

“I got here early so I could get a good spot by the stage,” said attendee Rob Goerling, who spent 22 consecutive hours standing in the same spot. “My fucking back is killing me, but it was worth it. Street Ponies kick ass!”

Other attendees were less enthusiastic. “I made sure to arrive two hours after the show was scheduled to start to account for ‘punk time,’” said 29-year-old scene veteran Erica Fisher. “My husband is pissed. I told him I would be home by 11 p.m. at the latest, now he’s texting me, ‘What’s his name? Erica, what’s his name?'”

Sources confirmed attendees passed the time by looking at the bands’ merch tables over and over, periodically asking the merch guy if he had any XXL shirts every 30 or so minutes. One source reported that due to the excessive number of cigarettes smoked outside of the venue, a snow shovel was needed to clear the sidewalk of butts.

“November Conspiracy just texted me and said they’re on their way,” said show promoter Steve “Froggy” Fordham around midnight as many show patrons began pitching tents and laying out sleeping bags. “Fuck, is there a P.A. here?

Related: Tall Guy Finds Perfect Woman to Stand in Front of at Show

Further delays persisted due to opening band Silk Death, whose lead singer spent two full hours requesting “more vocals in the monitor” while the guitarist searched for his tuner, followed by several more hours of the drummer absentmindedly hitting his tom heads.

At press time, several attendees were still present at the venue, hoping that being inside already will allow them free admission into tonight’s show scheduled for 7:30 p.m.