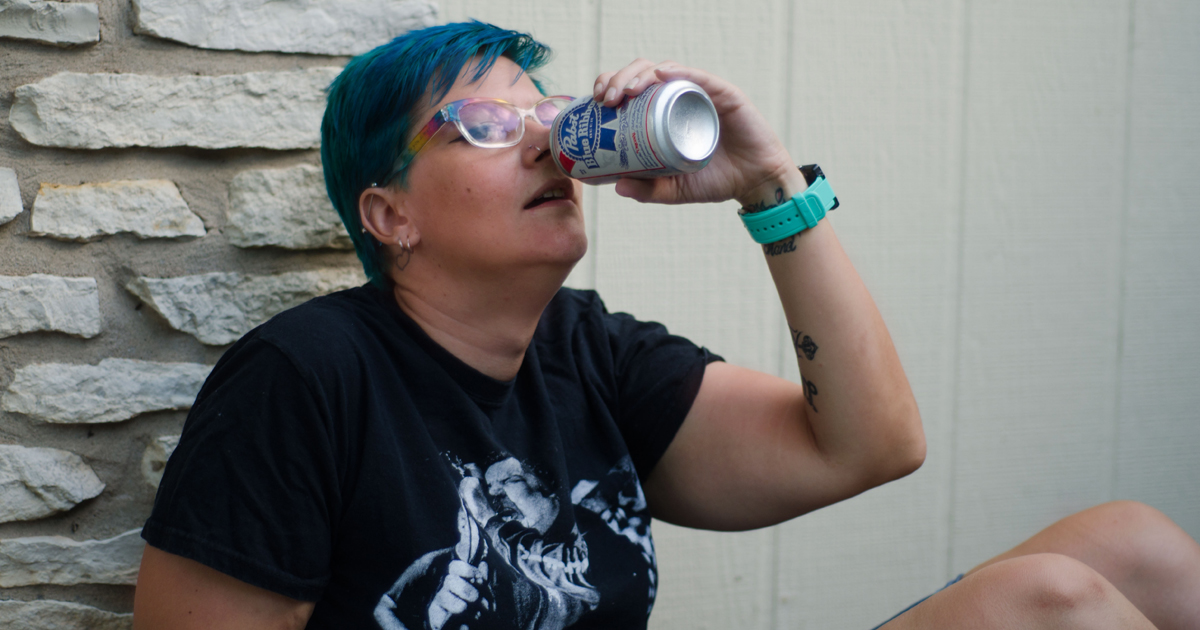 HARRISONBURG, Va. — Local punk and obvious alcoholic Marcia Fries announced moments ago that despite consuming nearly a dozen cans of Pabst Blue Ribbon beer in an attempt to beat the excruciating heat at a festival, she was somehow still incredibly dehydrated.

“After Grundle Mustard finished their set, I felt a little lightheaded, so I shotgunned six or seven PBRs to help my body recover a little bit. Apparently I wasn’t chugging fast enough, though, because I’m now unable to move,” said Fries, lying in a shallow mud pit surrounded by empty cans. “I’ve clearly got enough liquid in me to piss myself nonstop for the past 15 minutes, but honestly, I still feel a little parched.”

Rehydrating with PBR wasn’t a choice Fries made alone, first consulting with other concert attendees who claimed expertise in hydration.

“We’re pretty sure PBR is the number one drink for replenishing electrolytes without paying out the dick for some fancy-ass Gatorade like some athlete bitch,” explained self-proclaimed punk scientist Daryl “The Barrel” Johnson, poking absentmindedly at Fries’ inert body. “Sure, everybody loves them some blue flavor, but we recommend staying in your lane.”

According to several sources, however, Fries used PBR in an attempt to cure other ailments in the past.

“Just three weeks ago, Marcia got, like, the flu or cholera or something, and we weren’t even out of Walgreens before he was throwing back 40s of Pabst,” said Fries’ best friend and third cousin Candy Brown. “She felt horrible for several days, and might have even slipped into a coma there for a bit, but he obviously didn’t die… so it’s hard to say if the PBR helped or hurt, you know?”

At press time, Fries awoke, downed a twelfth PBR, and lit a joint, hoping to “boost that damn immune system the natural way.”