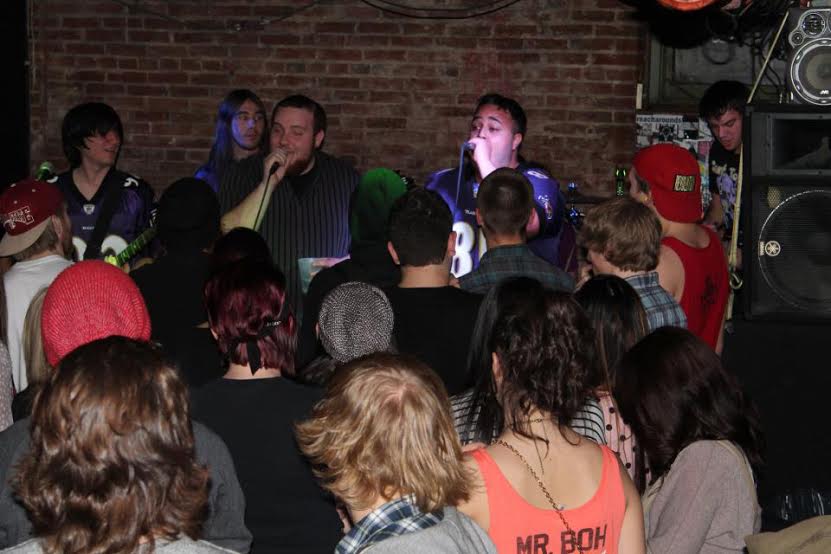 MADISON, Wis. – Reports indicate the crowd at the MADhouse’s Friday night punk showcase grew uneasy as they realized Brick and Mortar, the second band of the night, had multiple lead singers.

“I knew something was amiss way before they started their set,” said attendee Stephanie Omar. “Two guys kept checking the mics without guitars strapped on, and I realized my worst nightmare was about to come true. I didn’t think this happened at hardcore shows anymore — I thought we moved past this.”

The mood of the helpless crowd shifted as the stark reality unfolded before their eyes. Many speculated as to what genre of music Brick and Mortar had in store, with multiple theories running rampant due to the band’s ambiguous name. “My first instinct was that it was nü-metal; one singer, one rapper,” opined Omar, who claimed the second vocalist’s flat-brim hat exacerbated the dread in the audience.

“I was afraid it’d be one of those really ‘tough guy’ hardcore bands, and that someone in their crew was going to beat me up for not moshing,” admitted one attendee who spoke under the condition of anonymity. “I didn’t stick around for their set; I went to the store and bought some Nerds Rope and ate it on the sidewalk.”

Fear of bands with multiple lead singers is one of few unifying factors across a diverse alternative musical landscape in 2016, with people of all tastes agreeing that it is never acceptable. “Seriously — name one great rock ‘n’ roll band with two frontmen. You can’t,” argued freelance music critic Norman Fitz. “If you need to have a second singer, make sure he is playing an instrument; it makes more fiscal sense anyway. You split the $25 you made with one less person.”

While no one in the audience was available to comment after the set, the MADhouse sound operator later commented on the crowd’s negative reaction. “I cut their mics the second the band started up. It’s 2016, shouldn’t they know better by now?” he asked. He then paused before adding, “I overheard them talking about maybe adding a third vocalist to get the crowd ‘pumped up.’ God help us.”