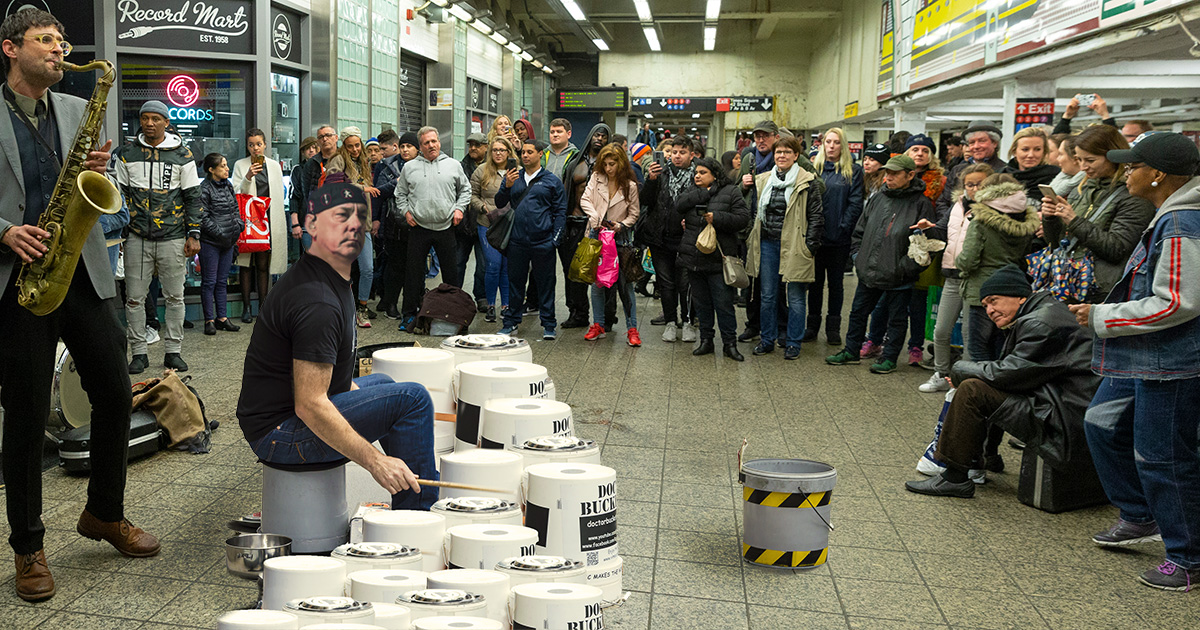 “I was by the 7 train stairway, just doing my thing, when I look over and see an elderly Canadian man absolutely obliterating these buckets in a way I did not think was possible,” said saxophonist and regular subway busker Howard Richards. “The dude had it all — a standard plastic bucket, paint cans, empty cat litter containers… some guy even accidentally kicked over one of those giant McDonald’s cups, and he incorporated it into his solo with no hesitation.”

“When I saw the little hydraulic stool spinning him around to different sections of buckets, I knew I couldn’t compete,” he added. “I mean, who the fuck is going to toss me a dollar when you can watch this guy pound out the intro to ‘One Little Victory?’ I just walked my ass over to Port Authority, where I belong.”

Not everyone, however, was impressed by Peart’s grandiose performance.

“There were, like, five million buckets all piled up, like, two feet from the stairs,” said Fort Greene resident Kristen Nguyen. “I tripped over one and missed my fucking train. I mean, it’s rush hour, you know? Get the fuck out of the way! The homeless problem in this city is really out of control.”

In discussing his impromptu performance, the celebrated drummer offered only humility.

“I am always looking to improve my craft. Back in the ’90s, I studied Buddy Rich and experimented with a new drumming grip to incorporate into my repertoire,” Peart explained. “Now that I’m retired, that doesn’t mean my love of drumming has stopped: I’m a wanderer and a searcher at heart, and there’s no place I’d rather show my appreciation for and dedication to the craft than in one of the busiest subway stations in the city, during the least convenient time for everyone. It’s the least I could do.”

At press time, Peart was preventing the doors on a Bronx-bound 1 train from closing as he attempted to set up his buckets inside the train car.