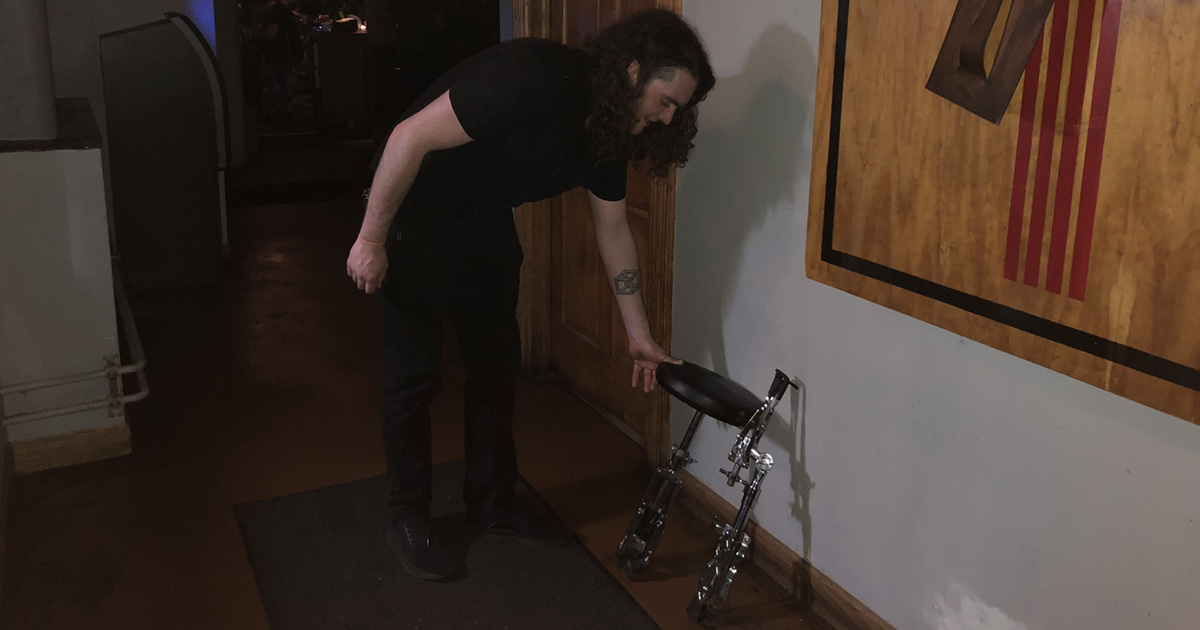 KALAMAZOO, Mich. — Drummer Amir Ferguson last night left yet another piece of his drum gear in a city in which he’d just performed, cementing his status as a contemporary version of Johnny Appleseed, the folk hero who planted apple trees across the American frontier.

“When we loaded out in Grand Rapids, I looked at Fergy like, ‘Yo, you got all your shit, right?’” said Jessica Sloane, guitarist in Lansing, Mich. grind outfit Shell Shock A.D. “He was pretty drunk, but he said he’d made up a mnemonic device or a limerick or something so he wouldn’t forget. But, nope — like fucking clockwork, this afternoon, he couldn’t find his fucking ride stand. Although, he lost the ride cymbal itself in Ann Arbor, so I guess the whole thing’s a wash anyhow.”

Vocalist Natasha Bernard was even more upset, as Ferguson’s gear was reportedly loaned to him by Bernard’s roommate after considerable convincing.

“God fucking damnit. Andre is gonna freak,” Bernard said. “I told [Andre], ‘Fergy doesn’t fuck with pills anymore. It’s chill.’ I backed him hard, you know? But look at this shit: we’re down three tension rods, a mounting bracket, a hi-hat clamp, two air vent grommets, four cymbal felts, and the shell of the bass drum, and we still have six shows left.”

Bandmates alleged that on virtually every stop on Shell Shock A.D.’s two-week tour thus far, drum hardware had either been found after the band had left — or reported missing the morning after. Some, however, have come to appreciate the newfound, accidental musical direction.

“As far as live energy goes, you can’t really beat S.S.A.D.,” said Ernesto Jimenez, who booked the band in a Hamtramck, Mich. warehouse last week. “It was a little weird that they played without a floor tom while the drummer sat on a milk crate, but the music’s too fast for drum fills anyway… and I think the power-electronics crowd around here appreciated how avant-garde the snare drum sounded without that little wire coil thing underneath.”

Cementing his legacy — much like the pioneer nurseryman himself — Ferguson has reportedly planted the seed within local youths who’d encountered his drum hardware.

“This one kid found his double flange bass drum hoop after the gig, and you could just see so much excitement in the kid’s face,” said Jimenez. “Right away, he started fishing around for other parts. And apparently, he’s already building a Frankenstein kit and telling his boys that they’re shitty friends if they don’t loan him gear. It was a beautiful sight to behold.”