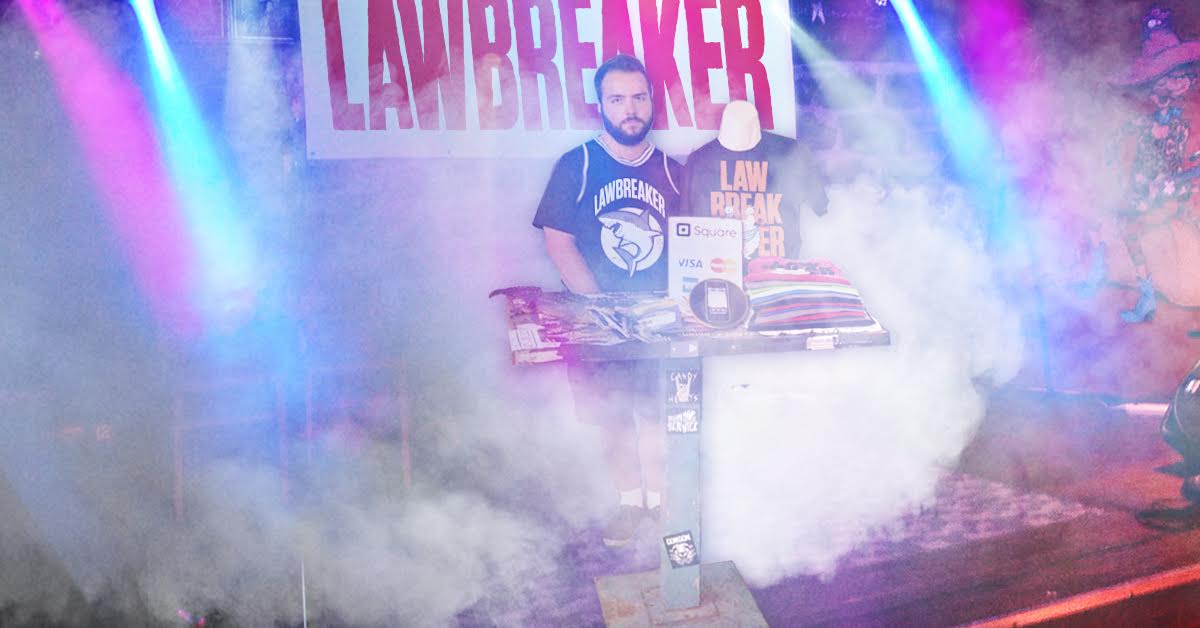 VANCOUVER, B.C. – Nick “Tha Knife” Porter, the dedicated merch guy for Las Vegas-based band Lawbreaker, soldiered on alone late last week to run distro at the shows the band had scheduled in Canada after they were denied entry at the border due to their extensive criminal records.

“It’s not my fault they couldn’t pass a background check. I’m just trying to earn an honest living,” said Porter, laying out Lawbreaker shirts at the first tour stop in Victoria. “Luckily, our van didn’t get very thoroughly searched after they yanked the band members out. I can’t afford to pay taxes on all of this shit.”

“What? I just assumed [the band] was all here. There is a whole table with the same shitty T-shirt in six different colors,” said promoter Vince Borgh, gesturing to the merch for a band he’d booked months ago. “And for some reason, that one guy wearing the Lawbreaker basketball jersey is even selling bootleg tapes of two of the other bands playing.”

With fans in attendance excited to finally see Lawbreaker, Porter snapped into action to deliver a unique experience.

“I thought something was up when the dude asked me to grab the other end of his table to bring it on stage,” Borgh explained. “He just used Spotify to play Lawbreaker songs on his phone for over an hour while he stood behind the merch table stone-faced. He didn’t even have an account — the same ad came up three times. He could’ve at least plugged it into the PA, but he just used his tip bowl to project the sound.”

Mindy Graham, a long-time fan of Lawbreaker, praised the impromptu set. “He had a really killer light show, but the fog was so thick on stage I couldn’t actually see any of the merch. To be honest, I heard they suck live anyway. I just came to buy a shirt.”

Porter says he plans on finishing the two-month tour, spanning Canada with another border crossing in Alaska. “I just don’t want to pass up this opportunity to travel and perform for people. A lot of bands will just yell something about ‘merch in the back’ in between songs. Well, I’m bringing it to the front. Besides, I quit my job for this. It’s all I’ve got.”