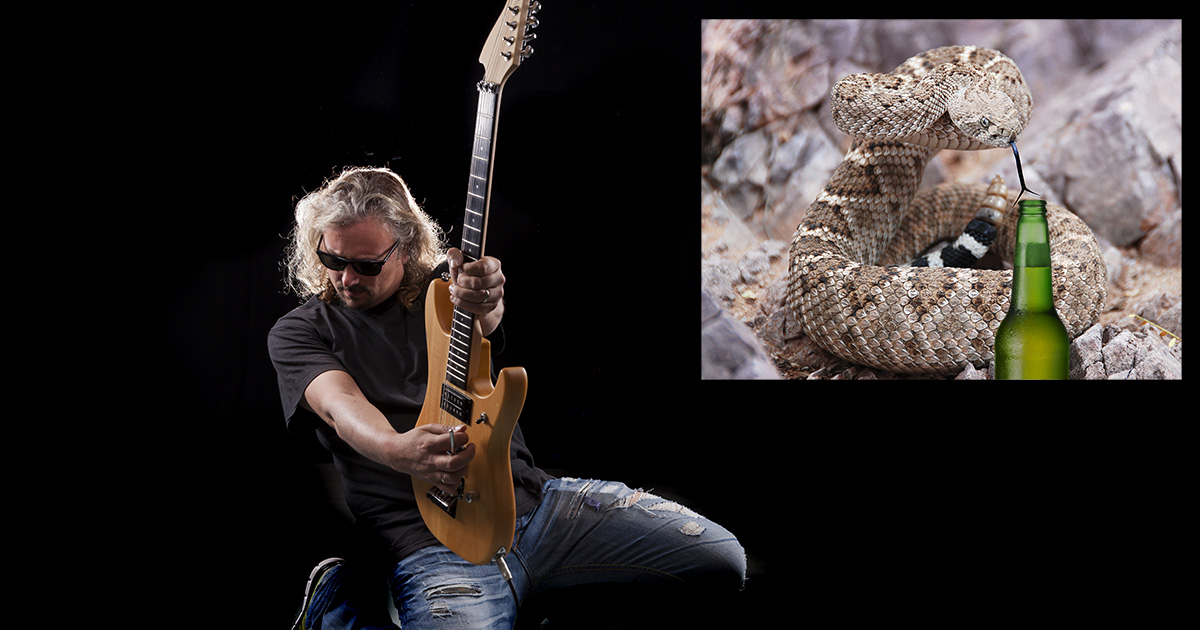 ARLINGTON, Texas — Local dishwasher Dale Bennett was suddenly imbued with the ability to play every Pantera riff yesterday after he was bit on the hand by a drunken rattlesnake, several impressed sources reported.

“This is all new to me. I’ve never played the guitar before in my life,” said Bennett, nursing a severely infected hand. “Now I’m playing the riffs from ‘Walk’ and ‘Cemetery Gates’ like nothing, and I still don’t understand what a pinch harmonic is! All because I picked a fight behind the bar with a rattlesnake over a perfectly good, half-full bottle of Bird Dog that someone tossed in the dumpster. At first I was pissed off when the son of a bitch bit me because it hurt like a motherfucker, and he got the booze. But the next day I just instinctively grabbed a guitar and was suddenly shredding ‘Cowboys From Hell.’ I didn’t feel like I was in control — my body just knew what to do.”

Family and friends close to Bennett report his new guitar skills as the most impressive thing he’s done since the time he beat his stepfather in a fistfight over the last beer in the fridge.

“I have to admit, I’m a little jealous. I feel left behind. We used to just listen to Pantera CDs, but now he plays along, and it’s flawless every time,” said Red Wells, a childhood friend of Bennett’s. “I was hoping I could get some of the same magic — like, maybe I could play the drums real good if I got scratched by a raccoon that was high on crank — but that just ended up with me needing a bunch of rabies shots, and I still might lose a few fingers. Dale has all the luck.”

However, local herpetarium proprietor Marshall Parker is concerned about a dangerous new trend that has started since the incident.

“That rattler’s escaped ‘bout six or seven times now, and it always manages to get good and tanked down behind Walter’s Pub,” said Parker. “Now these kids recognize it as the snake that gave that slacker ‘Pantera powers,’ and they’re intentionally trying to get bit by the damn thing. One kid got bit after the snake only had two bottles of Lone Star in him, and now the kid can only play Five Finger Death Punch songs, the poor bastard — there ain’t no coming back from that.”

At press time, the rattlesnake has switched from alcohol to cough syrup in the hopes of passing its talent-tinged venom onto potential future Soundcloud rappers.