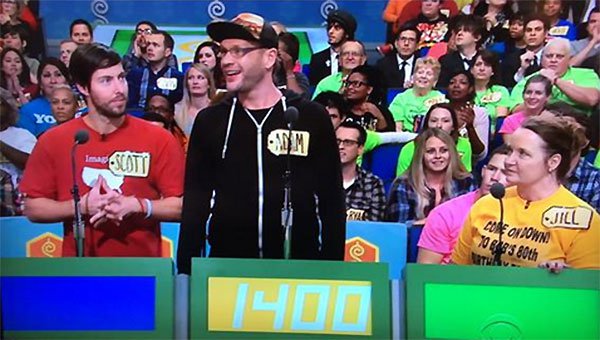 HOLLYWOOD, Calif. — After being called down to the contestant’s row, Killswitch Engage guitarist Adam Dutkiewicz won big during yesterday’s episode of The Price is Right. His final winnings—valued at over $50,000—included a new truck and a better band.

“I’m just so excited, it’s crazy,” said the 37-year-old guitarist. “I never won anything before in my life, so to win a car and a band actually worth playing in is crazy to me.”

Over the past decade, Dutkiewicz has made a name for himself, producing albums for Every Time I Die, Underøath, and dozens of other bands that are far superior to Killswitch Engage.

“I don’t even know what kind of music these guys play. As long as I am not playing metalcore anymore I’m happy. It’s been the same song over and over for the past 15 years,” Dutkiewicz said.

Fans of Dutkiewicz’s energetic stage antics are pouring to social media to show their support for the guitarist and his new band. Still, not everyone is as happy with the results of yesterday’s episode of the long standing game show.

“This is bullshit,” said Killswitch Engage drummer Tom Gomes on an Instagram post. “Adam won by guessing one dollar over. That’s such a dick move.”

“But congrats on the better band,” he added. “You deserve it, buddy!!!”

While it could take months before the prizes are delivered to Dutkiewicz’s Massachusetts home, it is expected that Dutkiewicz may forfeit one of his new cars and a bassist to taxes.