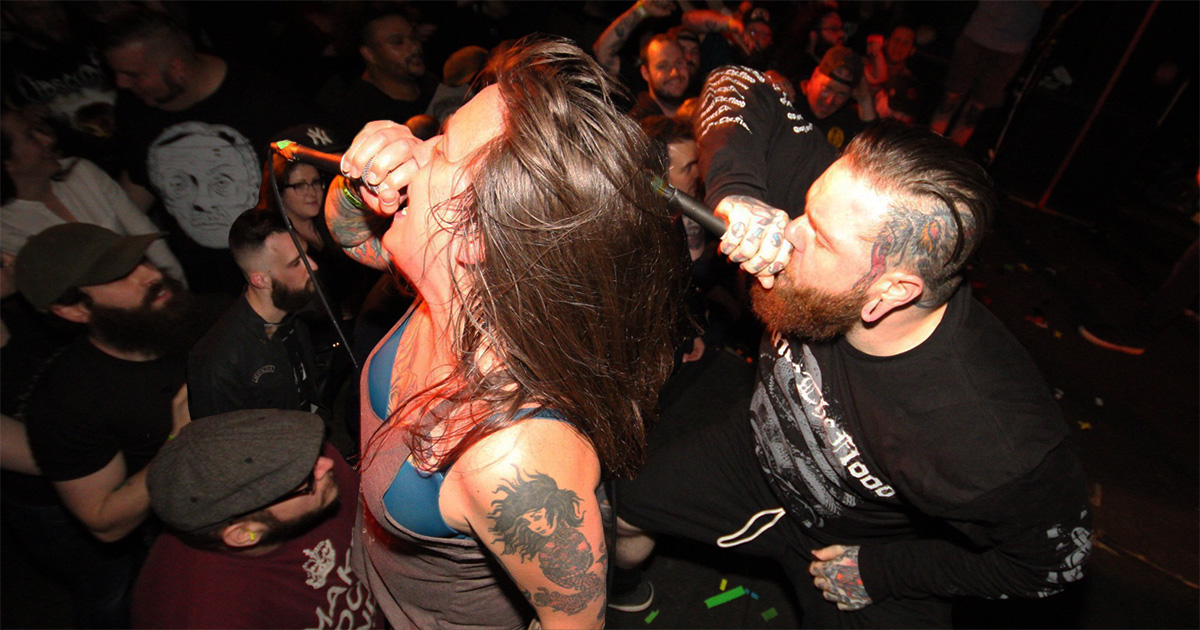 AUSTIN, Texas — Local hardcore band Cheapshot’s vocalists Victoria Weiss and Anthony Byers simultaneously launched into separate, heartfelt speeches between songs during a show last night, confirmed witnesses who “kind of got the jist of what they were both saying.”

“As soon as their first song finished, they both said, ‘Yo, give it up for Dean Mackey on guitar,’ and they were so perfectly in sync it almost seemed rehearsed… but things went off the rails from there,” said Cheapshot fan Eric Dell. “I think one of them was talking about scene unity, while the other was talking about the refugee crisis in Europe. I had no idea when to clap — or when to even throw out a simple ‘woo.’”

“As the drummer, I’m obliged to pound the bass drum every time someone with a mic makes a good point, but when two people are going off on different topics, it leaves me in a bind,” said Dawson. “Just last week, Victoria was making a great point about respecting women and I started sounding off on the bass drum… but at that very moment, Anthony also finished talking about a woman who killed a bunch of dogs, and because of the timing, it really sounded like I supported dog murder.”

“I feel like even just, like, a 30-second conversation about this before we play could really help,” Dawson added, “or at least keep things down to just one person ranting about a cause for way too long.”

Despite the confusion, neither Weiss nor Byers plans to change their stage banter patterns.

“Early on we tried alternating speeches between songs, but we both spoke for so long that we only had time for a couple songs per set,” said Weiss. “We figured it’s just easier to talk over each other, and let the crowd make their own decisions on who they want to listen to.”

“I honestly think this set up works fine,” agreed Byers. “It was a lot harder when we still had a third vocalist — he was always interrupting us and it really messed up our flow.”

At the end of their set, Cheapshot announced they will be heading to a local all-night diner, where Weiss and Byers are expected to yell their differing late-night breakfast orders in unison to the confusion of the waitstaff.