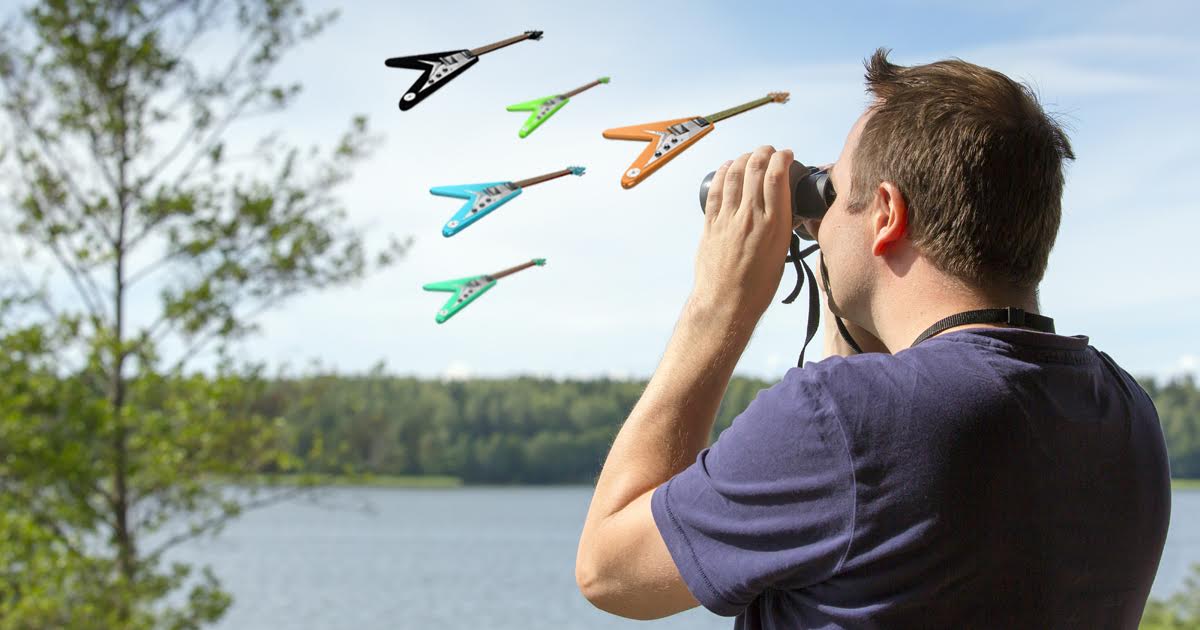 “Look at those six-stringed beauties,” said veteran watcher Noah Phelps, pointing at eight Flying V’s soaring in formation over the frozen lake. “I know they’ll be happier down south, but I’m gonna miss them squealing the licks from ‘Are You Gonna Go My Way’ at each other during mating season.”

When asked why the Gibson guitars embarked on such a perilous journey, Phelps gestured to the cold lake.

“Flying V’s aren’t winter instruments,” he said. “They don’t hold up well in these kinds of temperatures, or to the soft, folky music we play during these times. They need to go to sweaty, long-haired regions where people riff furiously and solo like cavemen on speed. That’s where they’ll thrive.”

Bailey Lasceter, president of the local chapter of the Yngwie Malmsteen Society of Guitar Conservation, pointed to basic evolutionary reasons for the Flying V’s departure.

“There’s fierce competition for resources in the winter,” Lasceter said as she tossed guitar picks on the ground for stray Sunbursts to peck. “Mated pairs of Les Pauls fly in to build nests, and they can get really territorial. And don’t even get me started about the ukuleles! Those things breed faster than mandolins.”

Noted guitarinthologist Shawnte Campana cited the “safety of the herd” when explaining why the Flying V’s tend to travel in groups.

“The V’s attract predators with their distinct shape,” Campana said, peering through binoculars. “I once saw a Steinway Grand swoop in and trap three of them under its lid. I’ve even seen a beat-up double bass pull a Flying V underwater and strangle it with its nickel strings.”

While the group dynamics of the Flying V’s often protect them in a savage ecosystem, the consequences of falling out of tune with the flock can be deadly.

“One winter, I found a V that got left behind,” Phelps sighed, waving at the distant flock. “It was missing a string. I nursed it back to health, even used it to practice some Matchbox 20 songs. But when it tried to rejoin the flock later, they tore it to pieces. They could still smell the stink of Adult Contemporary all over it.”