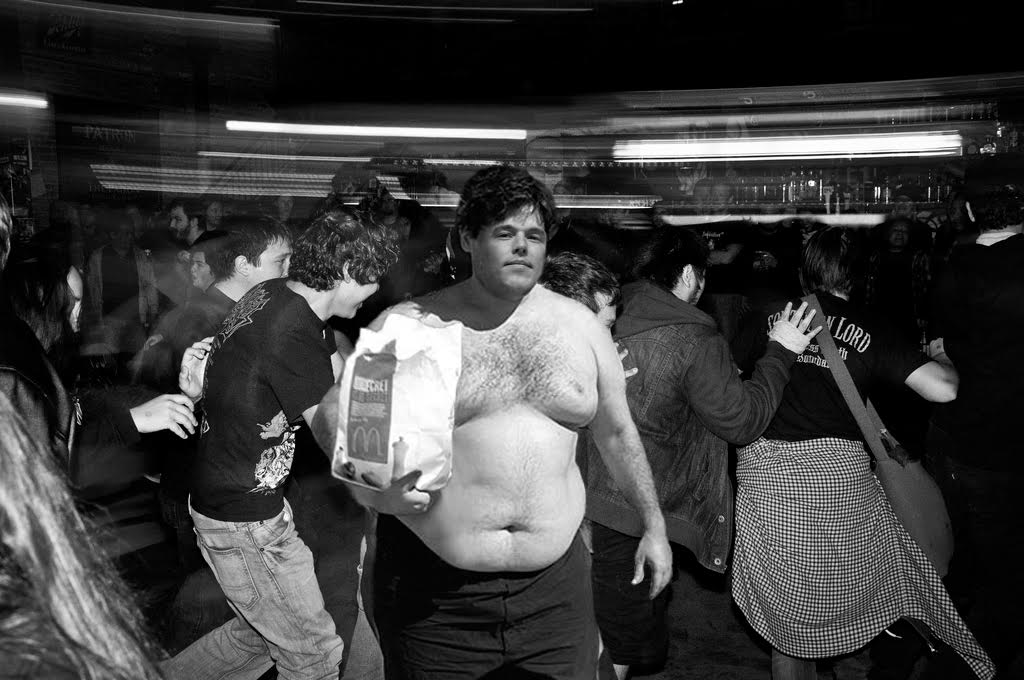 The portly Bussman removed his XXL T-shirt within minutes of the show starting, which left many people surrounding the pit uncomfortably damp due to his rapidly perspiring body.

“Every time he bumped into me it felt like I had been slimed by a giant slug. But you couldn’t get away from him, he was everywhere,” said show attendee Sarah Kaplan, while toweling the doughy man’s sweat off her forearms. “He just started going nuts when the first band started. I thought he would get tired pretty quickly judging by all the extra baggage he was carrying, but he never slowed down. He must have wrestled in high school or something.”

Bussman reportedly only took breaks during intermissions between bands, passing the time by drinking off-brand energy drinks and sitting in front of the venue’s only box fan.

While most in attendance tried to avoid Bussman, others held him in high esteem, including ClearlyxStraight frontman Daniel Morgan.

“Yo, this next song is called ‘Music Is My Anti-Drug’ and it goes out to this big boy right here who has been owning this fucking pit all night — GO!” said Morgan, which seemed to kick Bussman into an even higher, more impressive gear.

Sources close to the incident confirmed that Bussman didn’t even limit himself to one style of pitting, noting that he seemed to prefer the standard windmill and spin kicks, but would also crowd kill if the breakdown was heavy enough, and that he started many circle pits — often lapping other participants.

As of press time it is unclear how exactly Bussman was able to maintain such a pace, but many believe it could be boiled down to Bussman’s love of cocaine.