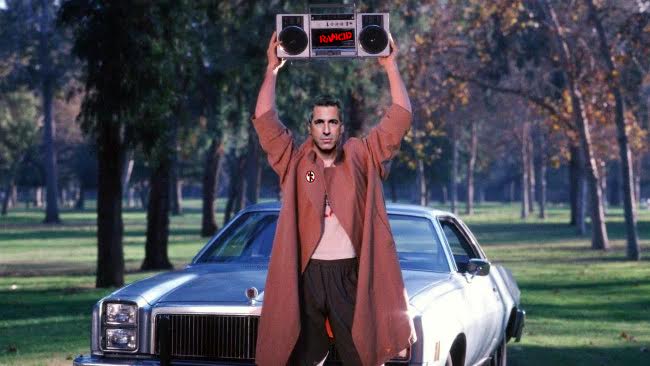 OLYMPIA, WA – G.L.O.S.S. has turned down a record deal with Epitaph Records worth approximately $50,000, the group announced recently via Instagram. The decision sparked many conversations and cringeworthy internet comments, but no one took the news harder than Epitaph founder Brett Gurewitz, who is still standing outside G.L.O.S.S.’s house holding a boombox over his head.

“Oh, they’ll come out eventually,” said Gurewitz undeterred in a trenchcoat, blasting Osker from the tape deck of the ’80s style boombox. “It’s just a matter of time before my grand gesture makes them realize what they are missing, how happy they’d be with us, what we could be together,” he continued, voice quivering.

Gurewitz’s attempt is just the latest of many desperate advances which have been rebuffed by G.L.O.S.S. members since their decision to attempt a more DIY approach to their upcoming LP. “They must have opened the mix CD I put in their mailbox by now,” Gurewitz said. “It has all their favorite Epitaph bands on it: Rancid, The Distillers, Peter Gabriel, Toni Braxton, all the classics. Is this thing loud enough? Could you ask them if they can hear it? I don’t think it’s loud enough…”

“Look, it’s very sweet,” said G.L.O.S.S. vocalist Sadie Switchblade, peeking between the blinds of their second floor window as rain began to fall outside, “but this is literally a scene from a movie. He could at least try something original. Not that it would work. Was that not clear from our announcement? It’s nothing personal we’re just not interested.”

The band’s announcement, which suggested that they struggled with their decision at first, has given hope to the heart broken Epitaph exec. “She said our offer was ‘tempting,’ and ‘deeply validating.’ If that doesn’t scream ‘there’s still a chance,’ I don’t know what does,” said a soaking wet Gurewitz, liking 6-month-old Instagram pictures of the band members. “They practically begged me to do this. They want us to break up with Warner Music Group? Done. They mean nothing to us. There are no feelings there, trust me.”

As of press time, Gurewitz was preparing to spend the night sleeping in the back seat of his Chevy Malibu, surrounded by empty cartons of ice cream.