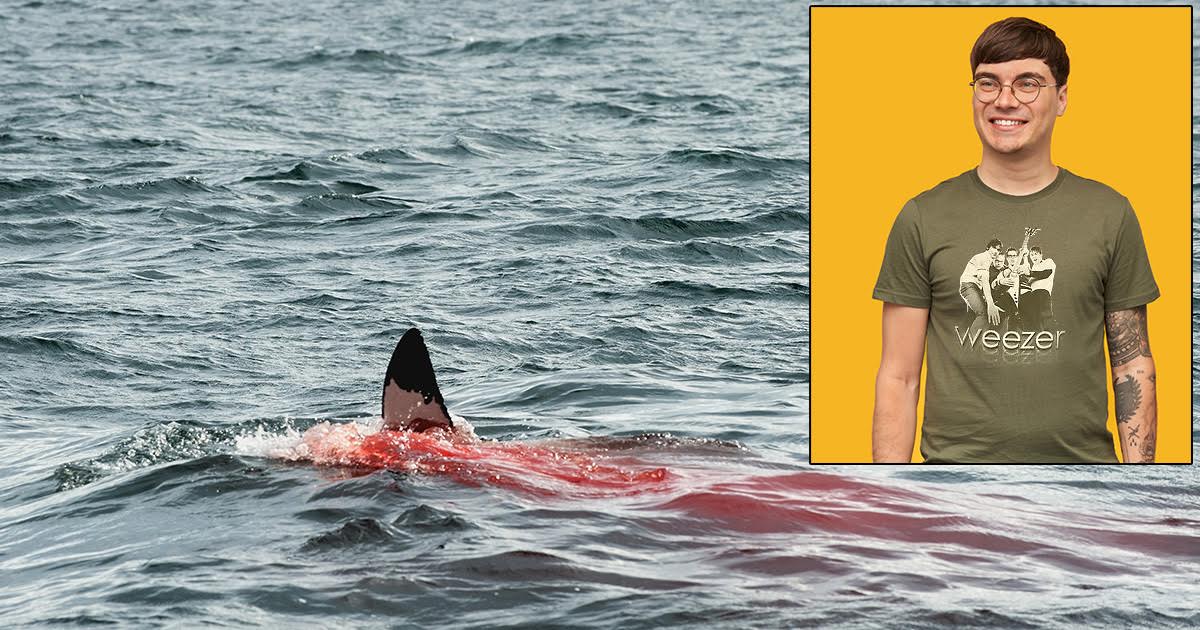 BELMAR, N.J. — The partial remains of self-proclaimed Weezer fanatic, Lance Figaro, were found washed up on the beach after it was suspected he was attacked and eaten by a bull shark while commuting to work via surfboard, traumatized beach rats confirmed.

“This isn’t the first time this has happened,” stated first-responder Harmony McRae. “These Weezer fans, Weezels, if you will, are always trying to ditch their car and surf to work. With rising fuel prices they think they can financially remain afloat but they don’t take into account that this sea is unforgiving and rolls like a thousand-pound keg. If you ask me, Rivers Cuomo has blood on his hands, and with how many jellyfish stings I have treated, pee on his leg too. Rivers has repeatedly tried to deny any wrongdoing, but if you ask me, these people should stay in their garages where it’s safe. Where they belong.”

“If I’m being real dude, I like totally wish he hadn’t been eaten by that shark,” a teary-eyed Olsen stated. “Don’t get me wrong, it definitely sucked to work with him since he was rarely on time and was either soaking wet or really stinky, but I’ve been working doubles for like a fuckin’ week dude. I miss seeing that dude show up with his surfboard in hand. Stinky or not, it always meant it was time for me to go home.”

“That could have been me, man. I guess it’s lucky I drive a car to work instead,” Olsen added.

Marine biologists across the east coast have warned the shark populations are experiencing undue stress under the current deluge of Weezer fans commuting themselves via tasty waves.

“There is no other way to put this; surfing to work is damaging these harmless and misunderstood creatures,” said Shelby Armstrong, the lead researcher at Adventure Aquarium. “A bull shark’s diet is carefully tailored to the fish it can run up onshore. Weezer fans have proven to be both tastier and easier to catch than the local fauna. It’s caused a major disruption in the shark’s migration patterns. Not to mention the plastic waste from the Buddy Holly glasses these people wear, it adds up to an ecological disaster.”

At press time, roommates of Figaro, are unsure how they will explain their friend’s death to his 18-year-old girlfriend who lives in a small city in Japan.