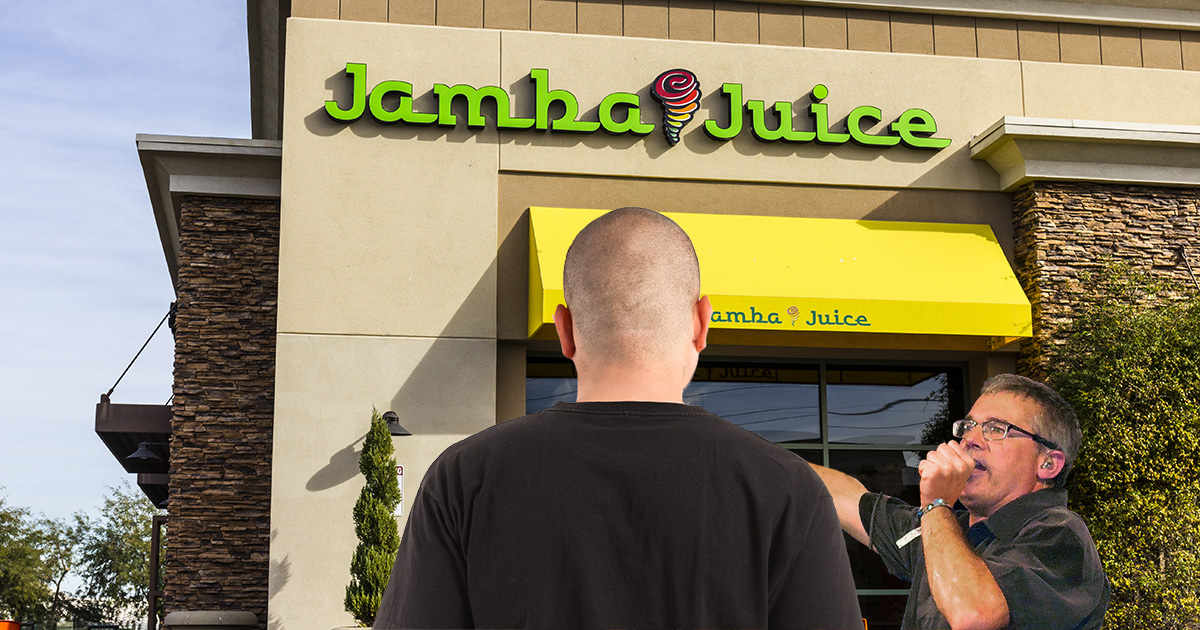 MANHATTAN BEACH, Calif. — Members of legendary punk band Descendents returned to the site of their original practice space, 9th and Walnut, to find the building was demolished and replaced by a Jamba Juice, multiple sources confirmed.

“It’s a shame, man. Me, Frank and Tony wrote some amazing songs in that garage, including some no one will ever hear like ‘Redondo Smells Like Wet Farts’ or ‘I Got Diarrhea in Hermosa,’” said founding drummer Bill Stevenson. “Now it’s just a corporate smoothie place. I tried to tell one of the kids in there that my band used to play here, and she seemed to get a little freaked out and went and got her manager. I ended up getting a free Razzmatazz, but I would have preferred a coffee.”

The band visited the location with a camera crew and old friend and Epitaph label founder Brett Gurewitz.

“We had planned on shooting a music video for ‘Baby Doncha Know,’ but apparently Jamba Juice has some sort of corporate restrictions with filming on their property. We can’t afford a lawsuit so we snapped a couple of photos by the sidewalk,” said Gurewitz. “We had to get out of there a little early because Milo was getting pretty worked up over the fact that Jamba Juice claims to be healthy. He took one look at the nutritional info on their website and started going off about what sugar does to a person on a molecular level.”

Descendents are not the only band with a historical punk location that has been turned into a corporate retail space.

“It’s always happening,” said photographer Mikael Shannanoff whose recent photo book “Rebellion to Retail: Iconic Punk Locales Turned Corporate Outposts” catalogued these kinds of changes. “The alley where the Ramones stood on the cover of their first LP? That’s a Soul Cycle now. The alley where The Dead Boys stood for ‘Young, Loud and Snotty’? Also a Soul Cycle. Truthfully, most of New York is now a Soul Cycle.”

At press time, Descendents and Gurewitz were heading off to visit the dorm where Milo stayed at UC San Diego which is now a college bar called Drink, Drink, Puke, Repeat.