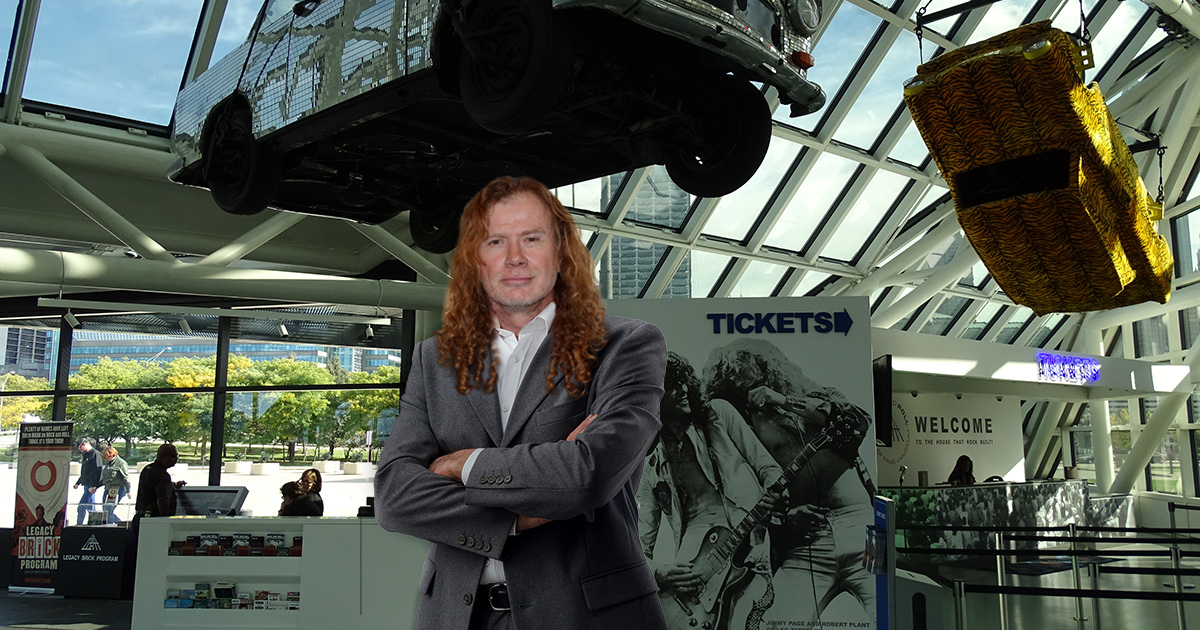 CLEVELAND — Metal legend Dave Mustaine refused to leave the lobby of the Rock and Roll Hall of Fame at closing time early this week until he was allowed to speak to a manager, frustrated sources confirmed.

“I have been a patron of this Rock and Roll Hall of Fame for years — I’ve spent a lot of money on food and merchandise, and all I want is five minutes to talk to the manager,” said the Megadeth guitarist and vocalist, standing next to the Metallica exhibit. “I don’t think that’s too much to ask, to be perfectly honest. I’ve been nothing but polite to everyone here.”

Security footage showed Mustaine entering the Hall of Fame shortly after doors opened, and harassing patrons in the “Performers” wing throughout the day.

“We got multiple complaints about a long-haired male, scaring children by headbanging and playing air guitar,” said Rock and Roll Hall of Fame Head of Security Derek Powers. “We encouraged him to calm down, and let him know that if he didn’t, we’d have to ask him to leave. He then called me a ‘real Lars Ulrich’ before demanding to speak with the manager.”

“I was on my way to the AC/DC exhibit… and out of nowhere, this red-headed albino or whatever started telling me that he is in the Rock and Roll Hall of Fame, and that Metallica doesn’t want him in the Rock and Roll Hall of Fame,” said Kansas City resident Clay Sherman. “I kept telling him I am also in the Hall of Fame because I bought a ticket, and that Metallica probably has no idea who the fuck he is… but he wouldn’t listen.”

Management claimed this was not the first time they’ve dealt with Mustaine.

“He writes at least four letters a month, letting us know he has a few guitars we could have, and that he’s willing to sign some headshots. But as soon as he gets here in person, he becomes sort of a jerk,” said Hall of Fame manager Clarissa Heinz. “And in 2009, we caught Mr. Mustaine in the kitchen dressed as one of chefs, trying to get on stage with Metallica. Thankfully, one of our employees realized it was him after Mustaine yelled, ‘Kirk Hammett is a no-talent scab.’”

“Does he even live in Cleveland? I have no idea how the fuck he’s in here so often,” she added.

At press time, Mustaine was caught spray painting “Megadeth Rulez” on a wall in the parking garage.