Complete Moron Claps Before Song Is Over 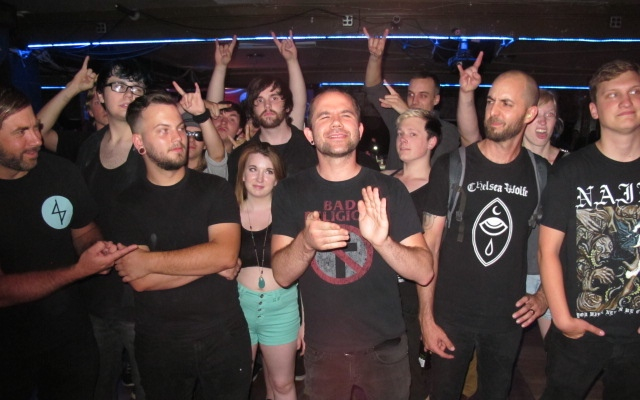 PROVIDENCE, R.I. — Complete moron and supposed Bad Religion superfan Rob Hooper clapped before the band even finished the song “I Want Something More,” ruining for all what was otherwise a fantastic show, according to unanimous reports.

“I really thought once the music stopped, the song was over,” said the shit-for-brains. “It was definitely a little embarrassing, but was it really that big of a deal? Hardly anyone noticed.”

Much to the breathing garbage pile’s dismay, it seemed a “pretty big deal” for nearly everyone who was there, as band members tweeted about the unfortunate incident during their set.

“It was blatantly apparent when the individual from the crowd clapped prematurely,” said Greg Graffin, Bad Religion frontman and Cornell Ph.D. “I was perplexed as to why one would do something so asinine and cretinous. The song had a full 10 seconds left.”

Former friends of the ignorant dipshit quickly distanced themselves from Hooper.

“It was humiliating. We were supposed to give him a ride home, but fuck him,” added Sarah Foisy. “He called and texted us to ask where we were, so we turned our phones off. I’m trying to forget I ever met him.”

The penis-with-ears’ night worsened once he returned home where, after hitchhiking 16 miles back to Woonsocket, the 18-year-old found all of his stuff on his former home’s front lawn.

“Rob’s a fucking idiot,” said Theresa Hooper, Rob’s mortified mother. “I remember someone pulling that same shit at an ABBA concert in ‘82 and I tried to stab him. He’s lucky I left his shit outside and didn’t just throw it all in the fireplace. Good fucking riddance.”