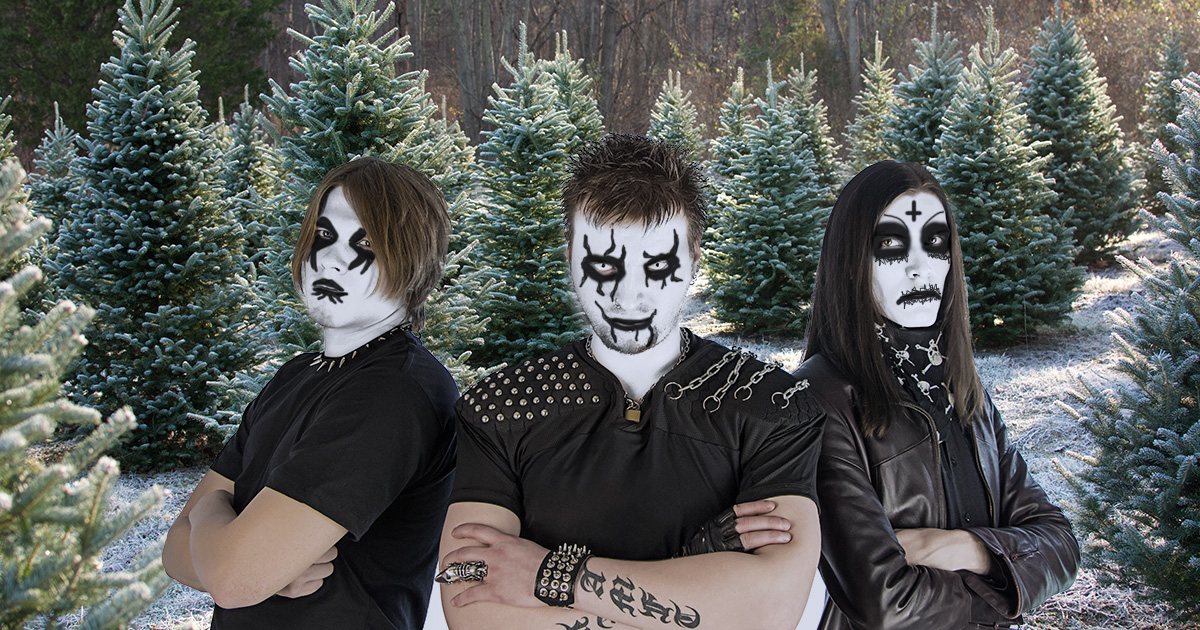 “I’m not gonna lie, the photos seemed pretty badass at first glance, the blood red snow, the weapons, it was sick,” said fan Tina Bronson. “Then you look closer…the rack of wreaths, the warm cider stand, the family of five running a tree through the bailer. It’s all a little much. Even the panoramic they used for their Facebook cover photo, the light and shadows were perfect…but right behind the band is a parking lot full of minivans. I might have been able to forgive them if this was one of those Christmas tree lots that only hires ex-cons, but no.”

Guitarist Tom Gundfeld admitted that the photo shoot was more a practical decision rather than a design choice.

“We originally planned a tour of Northern Europe culminating with a photo session in Hammerfest, Norway. Then the record company decided that we could probably just tour Central Pennsylvania and get a decent photo for almost nothing,” Gundfeld said. “We figured we could hike deep into the woods and get that isolated feel, but hiking in snow really sucks and we didn’t want our gauntlets to get wet and up rusting. We were barely 100 feet into the forest before we were all freezing our asses off. We were about to just give up, but on the way to the motel we saw the tree farm. We figured with the right angle we could get the feel of a remote forest, but I the old lady we asked to take the photos didn’t understand the aesthetic we were going for..”

“We see it a few times a week. You can spot them a mile away,” said staff member Eileen Wilson. “They pretend to be picking out a tree, a bunch of guys with long hair all dressed in black, and they mime discussing what kind of tree they want. After they get the photos they usually come up with an excuse for not buying anything, warm up at the fire barrel, maybe get some hot cider and move along. We used to kick them out, but sometimes they do follow through. I sold the guys from Gorgoroth a nice 10 foot blue spruce a few years ago. God only knows what they did with it, but hey, a sale is a sale, right?”

Bloodfrost has stated their next album will focus on ancient Chinese mysticism following a tour of Shaanxi Province, China, or maybe just dinner at a PF Changs in Akron.