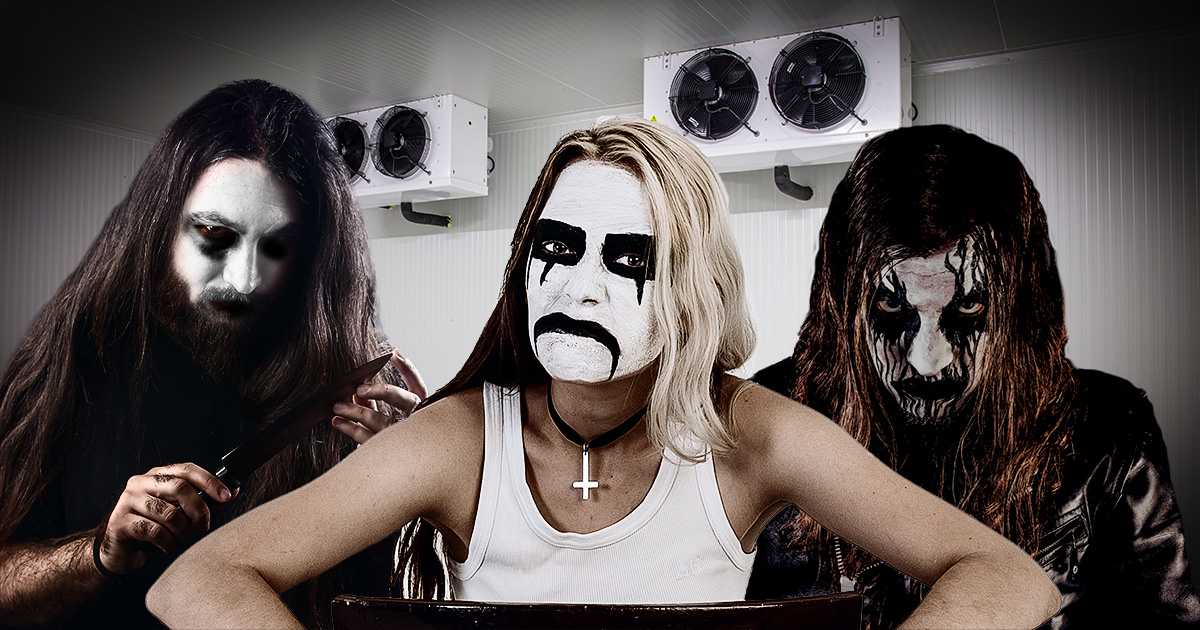 MESA, Ariz. — Black metal band Christrot took a band promo photo in what is obviously a restaurant storage cooler in order to emulate the cold, frosty atmosphere typical bands of the genre often have, sources report.

“The frosty, wintery image of typical bands is a tradition we strive to maintain,” frontman Byron “Blürt” Weiler explained while tightening up his forearm gauntlet. “And here in Arizona, it’s difficult to get away from the heat and sun so when it comes to promo pics, we gotta improvise. It just so happens that the best way to do so is to snap a few pics posing in convenient store beer caves, or restaurant stock coolers. With a little creativity and photoshop, you can easily brush out the slabs of frozen spare ribs or boxes of Old Milwaukee and the true kvlt fans are none the wiser.”

Aariz Arif, owner of the Shawarma Stop restaurant, details his history of having to deal with the nuisance of corpse painted scofflaws in his business.

“As if keeping the rats out of my kitchen wasn’t bad enough, I have these goons wearing panda bear face paint sneaking into my storage cooler to take goofy pictures,” Arif stated. “While I haven’t actually caught them in the act, I know for a fact they go in there because they leave traces of evidence behind. Once I saw black and white handprints all over a box of frozen beef I had laying on the floor. I’ve been told crosses and possibly garlic would keep them away, but to no avail. People are starting to talk, and no exterminator I’ve contacted will take care of the problem.”

Black metal scene veteran Nargül uses some of his knowledge and expertise on the scene to weigh in on the bizarre incident.

“There is a history of bands having difficulties maintaining the kvlt black metal imagery,” Nargül said while sipping on a goblet of wine. “Sometimes the climate just doesn’t cooperate and bands need to compensate for that. In fact, the cover photo for Immortal’s ‘Sons of Northern Darkness’ was taken in a pinch during a L.A. tour date inside the walk-in cooler of a Boston Market’s kitchen. The icon cover of Darkthrone’s ‘Transilvanian Hunger’? That was taken inside the ice cream section of a Citgo during an unusually hot summer in Norway. That’s actually chocolate syrup on his face.”

During press time, it was noted an unusually cold Arizona frost brought out droves of skinny guys in corpse paint to local cemeteries to get some quick pics in before quickly warming up again.